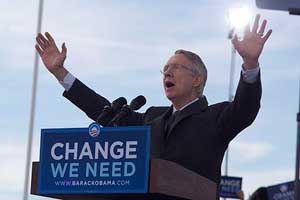 The Washington Post‘s Chris Cillizza has a new post on Sen. Harry Reid that tries to deal with the results of the Progressive Change Campaign Committee’s poll of Nevada that I wrote about on Thursday. The poll found that 55 percent of independents and 92 percent of Democrats with unfavorable views of Reid say they don’t like him because he’s not progressive enough. These results contradict Cillizza’s earlier assertion that Reid has to “carry Obama’s agenda effectively while also appealing to Nevada voters to whom that agenda is too liberal.” The poll also doesn’t square with Cillizza’s claim that Reid is in a similar situation to South Dakota’s Tom Daschle, the Democratic senate majority leader who was defeated for reelection in 2002.

It’s possible that Cillizza’s right: Maybe a different poll would find vastly different results. Maybe if Reid moved left to satisfy Democrats and independents who disapprove of him, he’d anger the Democrats and independents who approve of him now. But what’s frustrating about most of the reporting on Reid’s poll numbers (including Cillizza’s) is the extent to which right-wing arguments about what voters want are taken for granted. Cillazza just assumed that Nevadans wanted Reid to move to the right. It seems that whenever a Democrat is unpopular, mainstream journalists assume that it’s because he or she is too liberal. That could be the case. But such claims should rest on evidence, not gut feelings or dubious parallels between South Dakota in 2002—when George W. Bush’s popularity was formidable—and Nevada, a much larger, more urban and diverse state, in 2008.

Cillizza certainly makes some interesting arguments in order to avoid acknowleging the problems that the PCCC numbers create for his assumptions. For example:

From a rawly political perspective, Reid’s number among self-identified Democrats may not matter that much as he does not have a primary race and it’s hard to imagine loyal Democratic voters ultimately opting for either former Republican state party chairwoman Sue Lowden or businessman Danny Tarkanian.

This seems almost willfully obtuse. Midterm elections are generally low-turnout, base-driven elections. It’s not that Harry Reid has to worry about Democrats voting for Lowden or Tarkanian—he has to worry about them staying home and not voting at all.

Cillizza is really missing the point here. It’s unlikely that Reid is going to be able to win over Republicans by moving to the right. Republicans do think Reid’s too liberal, but he’s the Democratic leader in the Senate—they’re not going to vote for him unless he essentially abandons his party. That’s something he doesn’t seem prepared to do. So Reid should really be worrying about getting his base to turn out and convincing persuadable independents to vote for him. The PCCC poll is the best currently available information about where Democrats and independents want Reid to go. If they say he should move left, he probably should.