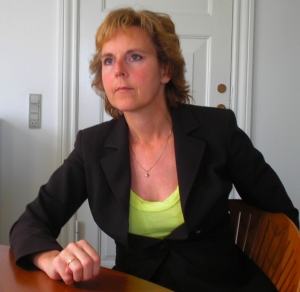 A last observation on Danish politics when it comes to climate and energy. The country has approved an ambitious plan to draw 50 percent of their electricity from renewable sources by 2025, and is already pulling 17 percent of total energy consumption and 30 percent of electricity from renewables. They’ve also endorsed the European Union’s plan to cut emissions 20 percent below 1990 levels by 2020, and are willing to go to 30 percent if other nations sign on.

Their plan was supported almost unanimously by the 175 members of Folketing*, the Danish parliament. On Friday we met with Danish Minister for Climate and Energy Connie Hedegaard, a member of the right-leaning Conservative People’s Party. She’s been the point person for the country’s ambitious climate and energy plan since 2007, and represents the country in international negotiations. She was the Minister of Environment for three years before the parliament created a separate role for climate and energy. Hedegaard is essentially Denmark’s Carol Browner, but with more direct influence.

Hearing her talk about why her work is evidence of her values offered a stark contrast to most American conservatives on climate and energy policy. Hedegaard made it clear that she approaches the issue from a conservative world view.

“It’s at the core of conservatism to take care of the environment, to protect nature, to use resources responsibly,” said Hedegaard. “I can think of nothing that’s more conservative than that.”

Her priority, she said, is that their policies be vehicles for economic growth. The export of clean tech increased 19 percent last year, triple what it was ten years ago. Just recently it passed pork as the country’s leading export product.

She also made the case that a deal in Copenhagen should be seen as imperative for American strategic interests, economically and politically. “In the end you can say the biggest loser, if we don’t get a common framework set, that will be American business. Because if they hesitate, they will lag behind,” she said.

“If the US does not deliver here, I think what is also at stake is how you are modernizing your economy and becoming energy self-sufficient,” she continued. “If the US is going to be seen strategically as the economic and political leader of the world of the 21st century, it’s crucial to join.”

*CORRECTION: A commenter correctly notes that the Danish parliament actually has 179 members when the four North Atlantic members are included–two from Greenland and two from the Faroe Islands.