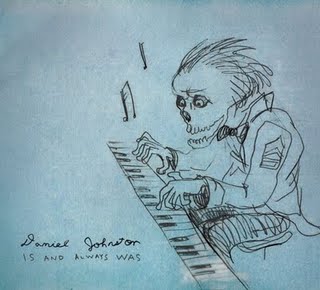 Daniel Johnston
Is And Always Was
Eternal Yip Eye Music

It has been more than a decade since cult figure Daniel Johnston went missing in New York, prompting members of Sonic Youth to troll the streets all night to find him. It’s been 29 years since Johnston distributed his first cassette, Songs of Pain (followed by More Songs of Pain), and six years since his last new album. This week marks the release of Is And Always Was, which could end up being one of Johnston’s most widely appreciated works. It’s full of solid rock songs the average listener can love without having to fast-forward through awkward moments of extreme honesty, which is maybe Johnston’s best-known calling card. Always Was is still honest, but it’s more fun than awkward.

Johnston’s hallmark lyricism is in full force on this album as he weaves gruesome tales of lost love, death, and despair. But this time they are backed by a full-bodied sound that’s more produced than his legacy of low-fi recordings. A few tracks include faux doo-wop melodies and Jonathan Richman-like plotlines that are told with Johnston’s interminable lisp and involve characters like “Queenie the Doggie.” In one track, in which Johnston goes to the lost and found to retrieve his brain, he identifies it as “a cute little bugger…but warped from the rain.” “Thank you, ma’am,” he sings. “I’m always losing that dang thing.”

Of course, he isn’t just joking around as Richman always seemed to be doing. Johnston might know his songs are borderline absurdist, but he’s not writing them for the performance aspect. At one show in Colorado Springs a couple of years ago, he finished only two songs before ducking off stage; the concert organizer had to plead with him to play a few more. But while  Johnston’s struggles with mental illness have kept him on the fringe of the indie rock limelight, everyone from Beck and TV On The Radio to Tom Waits and Wilco have covered his songs. And for all you M. Ward fans: “To Go Home” on Post-War is a Johnston original.

After a slew of upbeat mixes of grunge guitar and organ sounds a la the Beatles, the album slows down for “Tears,” which reminds me of a more-bizarre version of Marianne Faithful singing “As Tears Go By.” Johnston sings, I cry my tears, so sorry you’re not here/My deepest, darkest fear: the love that never was. The title track follows, the first of two dark and distorted songs near the end of the disc, with fittingly trippy lyrics: I have no reward except a promise from the Lord/and a neverending trip to nowhere. Johnston pulls out of the trip to end on an optimistic note with “Light Of Day.”

All in all, it’s not my favorite album of his, but it still rocks. If you have never listened to Johnston, and you’re looking for a point of entry into his prolific catalogue, Always Was might be your ticket. If not, wait until next year, when another new Johnston record called The Death of Satan is supposed to hit the streets. At 48, this Christian rocker—who responds to his own zealotry with artistic output rather than evangelism—still has a lot to say.