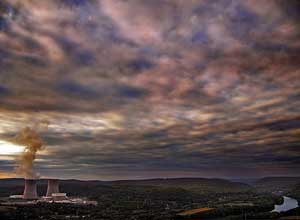 Should a booster of nuclear power with undisclosed business connections to nuclear energy firms be allowed to regulate the industry? By nominating William Magwood to serve on the Nuclear Regulatory Commission, President Barack Obama is doing just that.

Magwood served as the head of the Office of Nuclear Energy within the Department of Energy from 1998 to 2005, and in that capacity was the US government’s senior nuclear technology official. But both before and after his time in government, he has worked as an enthusiastic advocate for nuclear interests in the private sector—including for at least one company likely to have business before the NRC in the near future. Good-government groups say that this background should preclude him from serving as a regulator for an agency whose stated mission is to “regulate the nation’s civilian use of byproduct, source, and special nuclear materials to ensure adequate protection of public health and safety, to promote the common defense and security, and to protect the environment.”

“William Magwood has devoted his career to promoting nuclear power,” said Kevin Kamps, radioactive waste watchdog at Beyond Nuclear. “The NRC is supposed to be a safety regulator. They’re not supposed to advocate for expansion.”

The Project on Government Oversight last week sent a letter criticizing the nomination to senators Barbara Boxer (D-Calif.) and James Inhofe (R-Okla.), the chair and ranking member, respectively, of the Environment and Public Works Committee, which will hold a confirmation hearing for Magwood sometime in November. POGO said Magwood’s history as a booster for nuclear power “should not be relegated to the shadows, but should be examined in the full light of public and congressional scrutiny,” and charged that the nomination “violates the spirit” of Obama’s executive order seeking to eliminate conflicts of interest from the federal government.

Magwood’s potential conflicts are numerous. Prior to his tenure at the Department of Energy, he worked as a scientist at Westinghouse Electric Corporation, a company that provides nuclear fuel, services, technology, plant design, and equipment for the power sector, and which is likely to have business before the NRC soon. The NRC on Thursday rejected Westinghouse’s most recent application for permits for its new AP1000 reactor, citing concerns about its structural strength. Westinghouse will submit a new design, and the stakes are high: Seven US utilities in five states are seeking licenses to construct fourteen AP1000 reactors, accounting for roughly half of all new reactors under consideration. “He would be weighing in on the licensing of a reactor of a corporation he used to work for,” said Jim Riccio, nuclear policy analyst at Greenpeace.

More recently, for the past four years Magwood has headed Advanced Energy Strategies, which provides “strategic advice to domestic and international clients” on energy projects, including nuclear investments. There is very little publicly available information about AES’s clients: The company has no website, and its listed phone number goes directly to Magwood’s cell phone. So far, POGO investigators have only been able to turn up a short list of its activities, which includes work for US and Japanese energy companies. The group has asked the Senate panel to request copies of all contracts and relevant documentation on Magwood’s clients. “The Senate needs to get a sense of what this man has been doing for the past years before they throw their support behind him,” said Ingrid Drake, a POGO investigator.

According to POGO, AES is also connected to Secure Energy North America Corporation. This company doesn’t have a website, either, but Magwood is its president, according to his LinkedIn profile. SENA is described in press materials as a company “working with industry and investors to develop novel approaches to finance new nuclear power stations in the United States.” His position at SENA wasn’t included in his official biography from the White House. Reached by phone, Magwood declined to comment for this article or provide additional information about his business relationships.

Magwood has also been a vocal advocate of dumping waste at Yucca Mountain, an initiative delayed by intense public opposition despite the 25 years and more than $9 billion in taxpayers’ money spent to develop a repository there. In May, the Obama administration cut funds for Yucca, though the permitting process is still under way. Magwood, however, has argued that the Nevada site is ideal. “[Y]ou’re really in the middle of nowhere,” he told Environment & Energy Daily, a trade publication that reports on climate politics, adding that the Europeans he had brought to the site would be overjoyed to have a “desolate area like this” to dump nuclear waste—a feeling that Nevadans, understandably, do not share.

Unsurprisingly, the nuclear industry is pleased with the nomination. The Nuclear Energy Institute issued a statement last week praising Magwood and fellow nominee George Apostolakis as “qualified leaders on nuclear technology issues [who] have the breadth of experience necessary for an agency that effectively oversees the nation’s commercial nuclear industry.”

When it announced Magwood’s nomination on October 9, the Obama administration praised his advocacy for nuclear power as a qualification for the job. The NRC is made up of five commissioners—three selected by the party currently occupying the White House and two representing the minority. Both William Magwood and George Apostolakis are Democratic nominations. Magwood, the White House wrote, “was the longest-serving head of the United States’ civilian nuclear technology program,” and the champion for a “new consideration of “nuclear power technology in the United States.”

Indeed, even before Obama took office Magwood was leaning on the incoming administration to spearhead a nuclear expansion. In a January 15 memo to the new president published by the Progressive Policy Institute, Magwood and coauthor Mark Ribbing argued that the federal government should be advancing nuclear power by encouraging and investing in research and development on spent-fuel reprocessing and by creating a centralized waste disposal site. “A candid discussion is needed—within your new administration and in the country as a whole—about nuclear energy, a non-climate-changing power source that is actually capable of generating significant amounts of energy in the near term,” they wrote.

Whether Magwood’s record will be rigorously scrutinized remains to be seen. Inhofe publicly praised the pick; Boxer’s office did not return calls for comment. Environmental and good-government groups question whether he could operate as an impartial regulator. They also worry that Magwood’s appointment could make the commission less effective if he had to recuse himself from a substantial number of decisions for ethical reasons. In such an event, the NRC would be reduced to four voting members, creating the potential for gridlock.

Magwood’s nomination runs counter to Obama’s designation in May of Commissioner Gregory B. Jaczko to serve as the NRC’s chair, a move applauded by nuclear watchdogs. (Jaczko previously worked as an aide to Sen. Harry Reid, who has strenuously opposed the dumping of nuclear waste at Yucca Mountain.) The commission was broken out of the Atomic Energy Commission more than 30 years ago in order to be independent of nuclear advocacy, opponents of Magwood’s nomination argue. “The commission was created not to be balanced,” said Drake. “It’s supposed to be a regulatory body.”

“To think that a promoter of nuclear power is suddenly going to change his spots overnight and become a regulator is nonsensical,” said Greenpeace’s Riccio. “I prefer someone who has shown some regulatory spine in that job, rather than somebody that has advocated the nuclear industry’s point of view for his entire life.”