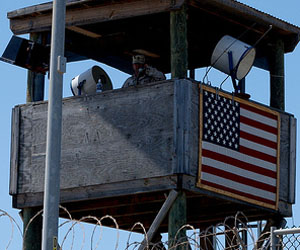 Photo used under a Creative Commons license by flickr user <a href="http://www.flickr.com/photos/jeshuanace/">jeshua.nace</a>

Read a summary of the judge’s remarkable ruling, which is also posted in full.

When President Obama took office and ordered the detention center at Guantanamo closed by next January, the biggest challenge was supposed to be the hard cases. Those were the ones in which the detainees were too dangerous to be let go but in which the evidence was insufficient for an American court, or had been obtained through torture, or would endanger national security if it became public. But a case decided last month in a Washington, D.C., federal court shows that for the Obama administration, the far easier cases—in which a judge has ordered a detainee released because there’s no evidence he poses a danger—can also be hard.

On Sept. 17, Judge Colleen Kollar-Kotelly ordered the release of Fouad Al Rabiah, a Kuwaiti detained at Guantanamo since 2002. She cited the complete lack of evidence justifying his detention. Kuwait is willing to take Al Rabiah back. Yet nearly a month later, he is still languishing at Guantanamo, along with at least 16 other detainees who have likewise been ordered released by a judge. By contrast, no more than 13 of the detainees ordered released have actually left Guantanamo. As the Obama administration telegraphs that it will probably miss its January deadline for closing Guantanamo, these cases raise the question of how much the government is even trying to place detainees.

Kollar-Kotelly found that the government had no grounds to keep holding Al Rabiah, a 50-year-old aviation engineer. The government alleged that Al Rabiah “provided material support to the Taliban and Al Qaida,” but the judge ruled that the evidence against him was “surprisingly bare,” consisting almost exclusively of confessions that even Al Rabiah’s own interrogators didn’t believe. The judge also found that Al Rabiah was subjected to “abusive techniques that violated both the Army Field Manual and the 1949 Geneva Convention[s].” She ordered the government to facilitate his release “forthwith,” writing, “If there exists a basis for Al Rabiah’s indefinite detention, it most certainly has not been presented to this court.”

But David Cynamon, one of Al Rabiah’s lawyers, says that the DoJ has refused to tell even him whether his client has been cleared for release. (I called, and they wouldn’t tell me, either.) “I’ve learned that DoJ has to be hit with a two-by-four before they will do anything voluntarily re[garding] Gitmo,” Cynamon wrote in an e-mail.

The government has 60 days to decide whether to appeal; Dean Boyd, a DoJ spokesman, told me no decision has been made about that. (Of the 30 cases in which a federal judge has ruled that a detainee be released, the government has filed an appeal for two of them.)

Even without an appeal, the government could continue to hold Al Rabiah. In February, the Obama administration created the Guantanamo Detainee Review Task Force to determine which detainees may be safely released or transferred to another country, a process independent of the federal court cases. Because the government doesn’t release the task force’s rulings, it’s impossible to know whether it has decided that some detainees who have won their court cases should be kept in detention. Miami Herald reporter Carol Rosenberg wrote recently that the task force has cleared two Kuwaitis at Guantanamo to be released, but the Department of Justice won’t say whether Al Rabiah is one of them. The secrecy makes it that much harder to hold the administration accountable.

Other detainees in Al Rabiah’s situation have waited months for their release. On May 4, a federal judge ordered the release of Alla Ali Bin Ali Ahmed, a Yemeni detainee whom the government charged was part of the Taliban or al-Qaida. The judge in his case found that the government had “utterly failed to present evidence” to support its claim. But despite the court’s order on May 4 that Ahmed be released “forthwith,” he was not returned to Yemen until Sept. 26—four months and 22 days later. Yasin Muhammed Basardh, another Yemeni, was ordered released in April but remains at Guantanamo pending the government’s appeal. Meanwhile, 13 Chinese Uighur detainees are still in Guantanamo, a full year after they were ordered released, as our government looks for a third country—probably Palau—which will take them and where they will agree to go. (For more on the status of detainees who have had their cases decided in U.S. courts, check out this ProPublica interactive chart.) The Department of Justice announced Friday that two more detainees had been released. One of them had won his court case; the DoJ will not reveal the identity of the second man.

According to the New York Times, Obama administration officials worried that even if Ahmed was not dangerous when he was first detained, Guantanamo itself might have made him so, turning him against the United States. If genuine, that concern must apply to every one of the 221 prisoners who remain in Guantanamo—whatever the strength of the evidence against them.