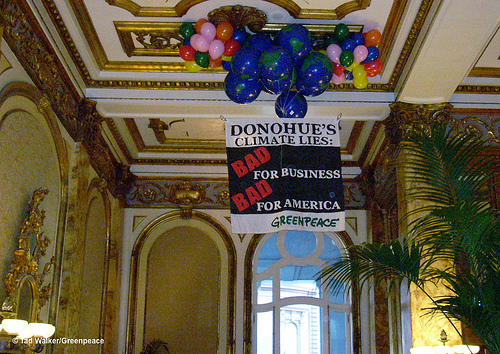 Yesterday, the US Chamber of Commerce came to San Francisco to hold a “government affairs” conference. SF is, of course, Mother Jones‘ home turf, but sadly, we weren’t sent an invitation—probably because of this, this, or this.

The Chamber’s contentious relationship with its chorus of critics didn’t keep a polar bear, a big street puppet, and a crowd of burly union members from gathering to give the business lobby what Greenpeace campaigner Lauren Thorpe called “a good San Francisco welcome.” At a park near the Fairmont Hotel, where the Chamber was meeting, the ususal lunchtime crowd of women walking shih tzus was was replaced by a sea of placards. Labor leaders denounced the Chamber for opposing health care reform, the Employee Free Choice Act, and green jobs. “I don’t think it’s a stretch to say they are so 20th century,” Danny Kennedy, cofounder of Sungevity, San Francisco’s largest residential solar company, said through a bullhorn. “We have to go kick them into the dustbin of history where they deserve to be.”

With that, the chanting crowd marched to the Fairmont. It was joined by San Francisco Supervisor Ross Mirkarimi, a Green Party member, who called upon the San Francisco Chamber of Commerce, which was attending the event, “to boldly stand up and say that what the US Chamber is doing is wrong.”

Rose Braz, a climate campaigner with the Center for Biological Diversity, was suiting up someone else in the polar bear suit she’d just shed ( “I got so hot,” she told a friend), when the UC Berkeley marching band and cheerleaders emerged from the hotel, fresh from a pep rally in the Tonga Room. A protester asked, “Do you want to join us?” Braz eagerly pointed to her replacement. “You see, we got a bear here too,” she said. “Go Bears! Go Bears! Right?” The band members shrugged.

The protest disbanded a few minutes later, shortly before the conference began inside. A woman at the registration table told me it was sold out and closed to the press, yet I could see that the room was still half empty. I later overheard her tell a colleague: “I wish more people had registered.”

“We’re not quite at full strength, but it’s time to go for those that are here,” a man announced before a Chamber official closed the door to prevent me from eavesdropping any further. Then he stood inches from my face and scowled at me. He looked like Daddy Warbucks. It was his first time in San Francisco. “It’s unique,” he said, still standing uncomfortably close to me. “Very picturesque.”

Yet not a pretty place for the US Chamber. The San Francisco Chamber of Commerce had just sent out a press release announcing that it was endorsing the platform of the Obama-friendly Coalition to Advance Health Care Reform. San Francisco Chamber president Steve Falk told me over the phone that he supports universal coverage and even the public option, as long as it doesn’t push out private insurers. That was a sharp contrast with the US Chamber, which has run ads against the public option in 20 states.

Falk was set to speak at the conference yesterday evening. “I plan to use this opportunity to talk about what we think are good business principles when it comes to both health care and climate change,” he told me. “For example, we think a market-based cap-and-trade system can work.”

I asked if he had a message for the protesters who’d turned up earlier in the day. “Given that they were only here for 40 minutes, they didn’t seem to live up to San Francisco standards,” he said, sounding disappointed. “I expected them to stay for most of the afternoon.”

UPDATE: Today, Greenpeace snuck into the Fairmont’s lobby and released the banner shown above. In an email, Thorpe wrote, “I hope Steve Falk thinks this is a little more up to ‘San Francisco standards.'”