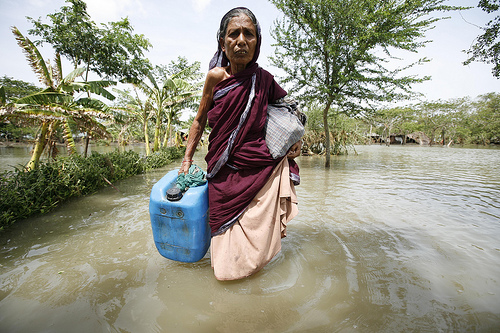 Less than a week before the Copenhagen climate conference begins, confidential documents reveal that the EU is pushing to use existing aid money, not new funds, to help poorer nations reduce emissions and adapt to climate change—a stance that NGOs say could derail the entire summit.

According to documents obtained by The Guardian, EU negotiators have removed lines from a proposed draft agreement that call for a new climate fund for poor countries most vulnerable to the effects of climate change. The text says the EU “cannot accept” proposed language that would call for climate aid to be “additional to” and “separate from” other development assistance funds.

If climate funds were to come entirely from existing pools of money, that would pose a huge problem for international negotiations. The United Nations has estimated that poor countries need as much as $170 billion per year to adapt to climate change. That’s $50 billion more than developed countries spent on aid last year.

In public, Britain and Holland have argued that climate funds should be additional, while Germany, France and other smaller nations have said the money should come from existing aid. However, the Guardian also obtained an email from an official in the UK’s Department for International Development making it clear that all money pledged for climate change so far is drawn from existing programs. (Most of it is pledged via the World Bank, which doesn’t have a reputation for being all that clean when it comes to financing energy development.) This conflicts with public statements from Prime Minister Gordon Brown, who just last Friday proposed a new $10 billion global fund to help poor countries with climate change to much fanfare. As it turns out, that money, too, would also come almost entirely from other aid budgets. The United States, meanwhile, has been even less generous.

For poorer countries, financial aid is a dealbreaker issue. Developing nations—especially places like Tuvalu, the drowning island nation that Rachel Morris reported on for the current issue of Mother Jones—are demanding new, additional funds to deal with the climate problems caused by rich nations. They have called for a minimum of $400 billion each year by 2020 to help curb emissions, expand clean energy development, and adapt to climatic changes that are already occurring.

So far, rich countries have suggested they may be prepared to offer around $100 billion annually, although finance ministers failed to agree on a concrete funding scheme in a meeting earlier this month. If that sum were to be drawn from existing aid, poverty and hunger alleviation programs, public health, agriculture, and other extremely important projects would suffer. “No developing country will sign up to an agreement that could give them no extra money at all,” Oxfam senior policy adviser Rob Bailey told The Guardian. “The EU and other rich countries must provide new and additional finance, otherwise there will be no deal at all.”