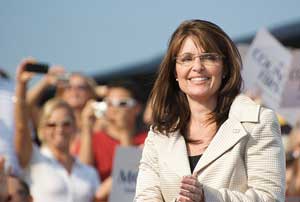 Well, I guess I’ve made it. Sort of. In Sarah Palin’s book, Going Rogue, I have a cameo appearance on page 305. I learned of this not by reading the book—just haven’t gotten around to it yet—but because Slate produced a tongue-in-cheek (but real) index for the index-free book. I’m listed under “haters, unnamed”—along with Andrew Sullivan and Ashley Judd. (“Haters, named” includes two Alaska-based critics of Palin—blogger Andrew Halcro and self-styled reform watchdog Andree Mcleod—and the Huffington Post.)

What drew me into Palin World was an encounter I had with a McCain-Palin supporter after a campaign rally in Virginia for John McCain two weeks before the 2008 presidential election. This fellow named Tito Munoz, who came to be known as Tito the Builder, was angry about press coverage of Joe Wurzelbacher, aka Joe the Plumber. A week earlier, Wurzelbacher had become a player in the campaign after questioning Barack Obama about his tax plan and suggesting Obama’s policies could prevent him from buying the plumbing company he worked for.

In the intervening days, news reports had noted that Wurzelbacher had not registered to operate as a plumber, that he did not make enough money to acquire the plumbing business where he was employed, that he had not paid $1,182 in Ohio state income taxes, and that he would actually pay less in taxes under Obama’s proposed tax plan than under McCain’s. In her book, Palin says that she liked Wurzelbacher and that “our campaign quickly realized” that he “typified the everyday American laborer who…ought not to be punished by oppressive tax policies.”

Palin accurately reports that Munoz, wearing a yellow hard hat and orange reflective vest, had come to that Virginia rally “mad as hell” at the media for having raised questions about Wurzelbacher. And she accurately notes—here’s where I come in—that a “left-wing reporter from the magazine Mother Jones told Tito he didn’t see anything wrong with the press coverage.” That exchange was part of a feisty conversation between me, Munoz, and several other McCain-Palin supporters.  (You can watch it here or below.)

Palin and her cowriter, though, provide a skewed account. They note that a woman in the crowd, treating me as a representative of the entire news media, yelled, “Why is it that you can go and find out about Joe the Plumber’s tax lien and when he divorced his wife and you can’t tell me when Barack Obama met with William Ayers [the 1960s Weather Underground radical]? Why? Why could you not tell us that? Joe the Plumber is me!” And in Palin’s account, Munoz piped up: “I am Joe the Plumber. You’re attacking me.”

What Palin leaves out is that as Munoz continued to complain that the media was not reporting on Obama’s past, I pointed out to him that the most comprehensive article to date on Obama’s relationship with Ayers was a long piece that had recently appeared in The New York Times, the ground zero of the liberal media conspiracy. Palin also neglected to note that when I told Munoz and his fellow McCainiacs that nonpartisan tax policy experts had concluded that Obama’s tax plan would impose lower taxes on Americans making below $200,000 a year than McCain’s proposal, Munoz and the others jeered, with one shouting, “Do you believe everything you read?” This was an indication that Munoz and his comrades were not in the mood for facts. And moments later—during another part of the conversation Palin does not chronicle—Munoz, referring to Obama, shouted, “Socialist, socialist!” (By the way, Munoz owns a construction company that has received a loan from the Small Business Administration and that has been registered as minority-owned in order to receive what some conservatives might call “affirmative-action” federal contracts.)

In writing about Munoz, Palin hails him as something of an American hero. She recalls that her campaign jumped at the chance to have him introduce her at a subsequent rally. But in her book, she really uses him—and my encounter with him—to demonstrate that she had the guts to go after Obama in a way McCain did not:

Tito the Builder sounded like the kind of guy who wasn’t going to be told to sit down and shut up, something I’d basically been told to do when I spoke on the trail about Obama’s associations with questionable characters, including Obama’s long association with Bill Ayers.

Palin recalls that McCain campaign headquarters approved an Ayers-related soundbite for her to use: Obama’s “palling around with terrorists.” But after media commentators accused her of playing down-and-dirty politics, she grouses, “the folks there [at the McCain campaign] did little more than duck.” Yet Palin notes that not only was she willing to continue this line of attack, she was eager to slam Obama for his relationship with “Jeremiah ‘God Damn America’ Wright.” She writes, “I will forever question the campaign for prohibiting discussions of such associations.”

Palin, no surprise, is unrepentant about her attempt to brand Obama as a pal-to-terrorists. And she’s using Munoz to back her up, implying that he knew better than those wimpy McCain campaign strategists. If Palin does decide to run for president in 2012, perhaps she can bring Munoz aboard as Tito the Adviser.