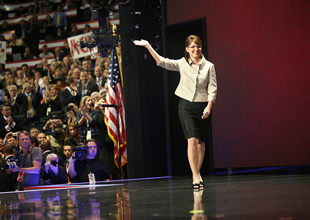 Once you whip up a mob, can you control it? That may be Sarah Palin’s next problem.

Before the votes were counted Tuesday night, the former Republican vice presidential candidate was already something of a winner. Though her candidate in the special election for a House seat in upstate New York, Doug Hoffman, lost to Democrat Bill Owens—in an area that hasn’t sent a Democrat to the House since the 1800s—Palin, by intervening in the race, had established herself as a successful ideological powerbroker. At first, Hoffman was merely a third-party conservative candidate in New York’s 23rd congressional district. Yet when Palin backed him over the official Republican in the race, a moderate assemblywoman named Dede Scozzafava, she helped turn this contest into a intra-party clash, which ended with the right wing of her party chasing Scozzafava out of the contest and forcing the GOP establishment to swing behind Hoffman. On a night when the Republicans won the governor races in New Jersey and Virginia, Hoffman’s defeat was almost anti-climactic. But for Palin, who previously had been in the news mostly for the wrong reasons—that doesn’t count the Levi Johnston soap opera—this episode made her seem relevant and influential.

With their anti-Scozzafava campaign, Palin, Glenn Beck, Dick Armey and other conservative firebrands declared they were not going to accept moderate Republicans as candidates, and they have emboldened grassroots right-wing activists to continue this crusade. That is, the former Alaska governor and the others have unleashed the furies. As has been widely noted, therein lies potential trouble for the party. An ideological civil war probably won’t be good for business for the GOP—though these conservatives clearly believe that right-wing purity is the best path for a Republican return to power. Still, Palin may run into a dilemma of her own.

Revved up by the purge in New York, tea partiers across the nation are now salivating—did you happen to see Zombieland?—as they eagerly search for other prey. They already have a list of RINOs (Republicans in name only) to hunt. On their to-get list is Charlie Crist, the Republican governor in Florida, who’s running for the Senate. Marco Rubio, a conservative former state senator, is challenging him for the GOP nomination. Also in the crosshairs for conservatives are Republican Rep. Mark Kirk, who is seeking Obama’s old Senate seat in Illinois, and possibly incumbent Republican Sen. Robert Bennett in Utah. Bennett’s being opposed in the GOP primary by a conservative activist who has Joseph Wurzelbacher, better known as Joe the Plumber, campaigning for her. Diehard conservatives—their blood lust heightened—seem to be adding names to their execution wish list almost daily.

Though Palin led this merry band in the battle of NY-23, she now might have to worry about these activists, especially if she’s pondering a presidential bid. With the Hoffman quasi-victory—or was it a Pyrrhic victory?—the grassroots conservatives have had their expectations raised. As they rush after other Republicans not deemed ideologically correct, many will look to Palin to continue leading the charge. But going after a no-name assemblywoman is a different matter than targeting sitting governors, senators, and House members. Is Palin truly willing to lead pitchfork-waving conservatives against well-established Republicans, such as Crist? Florida, after all, could be an important state in the GOP presidential primary.

Perhaps Palin does intend to keep her position as cannibal-in-chief. If not, she runs the risk of disappointing the true believers she inspired in the fight for NY-23. Alienating her fellow RINO poachers could cause serious difficulties for Palin in a presidential campaign—and leave an opening for other contenders to fill. “This is tricky stuff,” says a senior Republican strategist allied with another possible 2012 GOP presidential candidate. “She could be walking right into a breach.”

Thanks in part to Palin, there are plenty of conservative activists now fired up and ready to go. As they gallop after other Republicans, will Palin stay at the front of the pack? Or might she be trampled by the ideological vigilantes she has helped set loose?