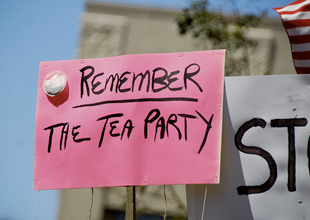 The tea partiers are launching the revolution. This week. But will anyone actually show up?

On Sunday, Rep. Michele Bachmann challenged viewers of Sean Hannity’s Fox News show to join her last-ditch attempt to kill health care reform. The fiery Minnesota Republican plans to hold a press conference at “high noon” on Thursday. She urged Americans to flood the halls of Congress that day, find their elected officials, “look at the whites of their eyes and tell them, ‘don’t you dare take away my health care.'”

Since then, so-called tea party patriots have been burning up the Internets trying to rally supporters to attend Bachmann’s event. But so far, their efforts haven’t amounted to much. The official Tea Party Patriots website laments that Bachmann’s rally is being stymied by a “media blackout“—meaning that mainstream outlets like the New York Times and the Washington Post have ignored it.

The lack of media interest could stem from the tea partiers’ failure to mobilize as a genuine grassroots political force. In preparation for Bachmann’s press conference, the patriots devised a “three phase attack” on Congress called “Operation House Call.” The idea was for tea partiers to call, email, fax and visit key lawmakers, starting at 1:30 on Tuesday afternoon.

But a quick survey of some of the 13 targeted senators’ offices suggests that the “attack” has barely registered on the Hill. Kimberly Hunter, a spokeswoman for Sen. Jim Webb (D-Va.) says that at a little after 3:30 on Tuesday, her office hadn’t seen any uptick in calls or visits. If the tea partiers do call, she adds, “We’re happy to listen to their opinions.” Likewise, a spokesman for Sen. Mark Warner (D-Va.), another target on the patriots’ list, says the office has fielded a few calls from people saying they are coming to Thursday’s press conference—but overall the volume has been “nothing unusual.”

As of Tuesday afternoon, the official tea party website indicated that only 25 patriots were on hand for “Operation House Call.” That’s a pretty paltry showing for an organization that claims to represent millions of disaffected Americans. Bachmann’s rally on Thursday could be a different matter—but probably not because of the tea party patriots.

Ever since the inception of the tea-party movement, it has been dogged by accusations that it is really an astroturf operation—a fake grassroots uprising fueled by corporate-funded front groups. Organizers maintain that the phenomenon is an organic expression of anger by ordinary citizens. At their big September 12 gathering in Washington, protesters chanted “not Astroturf” in response to charges by House Speaker Nancy Pelosi that health care town hall protests had been engineered by corporate-backed PR firms. Yet, like the town hall protests, Bachmann’s “high noon” event and the preceding lobbying efforts are getting a big boost from FreedomWorks, the organization headed by former GOP House Majority Leader and lobbyist Dick Armey. FreedomWorks grew out of a tobacco industry front group and is now funded by big corporations.

FreedomWorks has started a new website called dontkillgrandma.com to help defeat health care reform. And it lays out quite a schedule for this week. Freedom Works suggests that on Wednesday, “patriots” organize vigils in front of their local congressional offices at noon, where they should read from the 1,900 page health care bill.  And dontkillgrandma.com urges protesters to start chanting “Kill the Bill!” in unison at midday on Thursday.  Presumably, Bachmann will lead such a chorus at her “high noon” event.

In case the tea partiers are too poor or disorganized to make the pilgrimage to Washington on Thursday, another conservative organization, Americans for Prosperity, will bus people in from New Jersey, North Carolina and beyond. AFP is the creation of the owners of Koch Industries, one of the largest privately-held oil and gas interests in the world. Koch also holds interests in pharma and medical device companies. According to AFP, buses in New Jersey are already fully booked, suggesting that organizers have found at least some folks interested in a free trip to DC. Whether they can articulate a good reason to “kill the bill” remains to be seen. But if the tea partiers can’t make an impact without this kind of corporate welfare, it’s hard to imagine that their movement will ever amount to much more than a few bouts of public screaming.