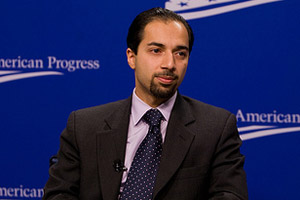 Did Michael Goldfarb, a former John McCain staffer and now an editor of the neoconservative Weekly Standard, defame Trita Parsi, the founder and president of the National Iranian American Council, by suggesting that Parsi is working for the Iranian government?

Last week, Goldfarb described Parsi as “the Iranian regime’s man in Washington.” Goldfarb didn’t present any evidence to support this. He stated it as fact and moved on. When I emailed Goldfarb asking if he meant to say literally that Parsi is working for the Iranian government, he doubled down, replying, “If it walks like an ayatollah and quacks like an ayatollah…. Maybe you should do your due dilligence [sic] on Trita Parsi.”

As Daniel Luban points out in an interesting post at The Faster Times, Goldfarb may have crossed a line here:

[The comment seems to accuse] Parsi not merely of holding substantively wrong political beliefs but of actively working for Iranian and against American interests.

Parsi, whose group advocates negotiating with Iran, says he believes Goldfarb was indeed accusing him of toiling for the Iranian government. He insists that is “nonsense” and “clearly a political campaign” against NIAC. “Anyone who has followed NIAC knows how critical we have been of the Iranian government,” Parsi says. After our conversation, a spokesman for NIAC sent me 15 statements and op-eds issued by the group this year that criticized the Iranian regime.

Goldfarb wasn’t alone in criticizing Parsi. Last Wednesday, the Atlantic‘s Jeffrey Goldberg*  wrote that Parsi “does a lot of leg-work for the Iranian regime.” Like Goldfarb, Goldberg did not cite any evidence. But when I emailed him about his comment, he backed away from implying Parsi was in league with Tehran:

No, I’m not saying he literally works for the Iranian regime. I think you’re right, the term “leg-work” definitely could imply something I wasn’t meaning to imply. If that’s the way fair-minded people are reading it, then it’s my mistake. What I meant to suggest is that his organization functions as Iran’s AIPAC in Washington (though it’s not as effective, of course). AIPAC, obviously, does a great amount of leg-work—meaning, in my understanding, a great deal of lobbying and advocacy—to advance its primary cause, a militarily and politically powerful Israel closely allied with the United States. But it doesn’t take Israeli money, or, as best as I can tell, Israeli instruction. I assume, though I don’t know, that Parsi doesn’t take Iranian government money or Iranian government instruction, either. I think he does argue quite vociferously against sanctions, and he does tend to present, at least in my reading, a fairly benevolent understanding of Iran’s rulers and their motivations, and a fairly harsh reading of the Israeli government’s motivations.

Goldfarb and Goldberg’s remarks could potentially have legal consequences.

After another writer made similar allegations on a website, iranianlobby.com, in 2007, Parsi and NIAC sued for defamation. (The case is ongoing.) Parsi notes that his organization has not yet decided whether to pursue legal action against Goldfarb and Goldberg.

There’s no credible, publicly available evidence that Parsi is paid by or takes instructions from the Iranian government. If Goldfarb is charging that Parsi really is an operative for the ayatollahs, he ought to back up the claim—lawsuit or not.

*Clarification: I don’t think Goldberg’s a neocon, and I hope this post doesn’t imply that he is.