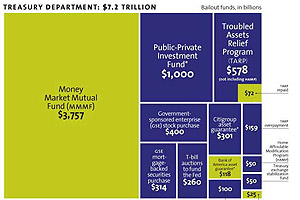 The price tag for the Wall Street bailout is often put at $700 billion—the size of the Troubled Assets Relief Program. But TARP is just the best known program in an array of more than 30 overseen by Treasury Department and Federal Reserve that have paid out or put aside money to bail out financial firms and inject money into the markets. To get a sense of the size of the real $14 trillion bailout, see our chart here. Below, a guide to the pieces of the puzzle:

Money Market Mutual Fund: In September 2008, the Treasury announced that it would insure the holdings of publicly offered money market mutual funds. According to the Special Inspector General for the Troubled Asset Relief Program (SIGTARP), these guarantees could have potentially cost the federal government more than $3 trillion [PDF].

Public-Private Investment Fund: This joint Treasury-Federal Reserve program bought toxic assets from banks and brokerages—as much as $5 billion of assets per firm. According to SIGTARP, the government’s potential exposure from the PPIF is between $500 million and $1 trillion [PDF].

TARP: As part of the Troubled Asset Relief Program, the Treasury has made loans to or investments more than 750 banks and financial institutions. $650 billion has been paid out (not including HAMP; see below). As of December 21, 2009, $117.5 billion of that has been repaid.

Government-sponsored enterprise (GSE) stock purchase: The Treasury has bought $200 million in preferred stock from Fannie Mae and another $200 million from Freddie Mac [PDF] to show that they “will remain viable entities critical to the functioning of the housing and mortgage markets.”

T-bill auctions to fund the Fed: In November 2008, the Treasury announced that it would borrow $260 billion to fund the Supplementary Financing Program, whose proceeds were deposited with the Federal Reserve.

TARP overpayment: This June, the Congressional Budget Office estimated that the federal government would lose $159 billion from its TARP loans and investments due to changes in their market value. (So far, Treasury has earned $14.4 billion in dividends from TARP.)

Potential international fund liabilities: In April, the United States committed up to $100 billion to fund the International Monetary Fund’s lending and ensure that it “has adequate resources to play its central role in resolving and preventing the spread of international economic and financial crises.”

HAMP: The Home Affordable Modification Program offers financial incentives to lenders to modify home loans. $75 billion in federal funds has been committed; $50 billion of that comes from TARP is set aside to modify mortgages not owned or guaranteed by Frannie Mae, Freddie Mac or other government-sponsored entities.

Commercial Paper Funding Facility: With the support from the Treasury, the Fed established the CPFF in October 2008 to increase the availability of short-term debt (commercial paper) funding. Up to $1.8 trillion [PDF] was earmarked for the program.

Mortgage-backed securities purchase: In 2009, the Fed earmarked up to $1.25 trillion to buy investments based on home loans.

Term Asset-Backed Securities Loan Facility: TALF provides financing to investors who are buying asset-backed securities. In February 2009, the Fed and Treasury announced an expansion of the program to generate up to $1 trillion in new lending.

Money Market Investor Funding Facility: The MMIF was established in October 2008 to provide loans for investors buying certificates of deposit and commercial paper. According to SIGTARP, $600 billion [PDF] was allocated for the program.

Treasury Purchase Program: In March 2009, the Fed was authorized to purchase up to $300 billion of treasury securities.

GSE Program: In March 2009, the Fed increased its purchases of debt from government-sponsored enterprises (Fannie Mae and Freddy Mac) from $100 billion to $200 billion.

Primary Dealer Credit Facility: The PDCF provides overnight loans to primary dealers (financial firms that can engage in direct transactions with the federal government). The Fed allocated $147.7 billion [PDF] for it in 2009.

Open Market Operations: In September 2008, the Fed injected $125 billion into the market by purchasing securities and repurchase agreements, or repos, in which primary dealers borrow cash from the fed.

Tri-Party Repurchase Agreements: The Fed provided $124.6 billion [PDF] for this type of repo in 2009.

Primary Credit: The Fed provided $112 billion [PDF] to offer loans at a discounted rate to eligible institutions in 2009.

Temporary Reserves: Between August and September 2007, the Fed made $93 billion of temporary reserves available for loans to financial firms.

Single-Tranche Repurchase Agreements: In 2009, the Fed offered a total of $80 billion for short-term loans to holders of mortgage-backed securities.

Term Auction Facility: Under TAF, the Fed auctions short-term loans to financial institutions. The amount of loans offered has varied widely; between December 2009 and January 2010, $75 billion in loans will be available.

AIG preferred stock interests, credit, and loan: The Fed provided $53 billion to the struggling AIG in various forms between 2008 and 2009.

AIG Securities Lending Facility: In October 2008, the Fed authorized the Federal Reserve Bank of New York to borrow up to $37.8 billion in securities from AIG.

TSLF: The Term Securities Lending Facility offers Treasury collateral to the Federal Reserve Bank of New York so it can auction weekly loans to financial institutions. $25 billion in loans will be available between November 2009 and January 2010.

TOP: The Term Securities Lending Facility Options Program allowed primary dealers to get TSLF loans in exchange for collateral. At the time of the program’s termination in June 2009, $50 billion in loans had been offered.

Expansion of system open market account securities lending: In July 2009, the Fed increased its limit for loans of securities to brokers from $3 billion to $5 billion, for a total of $36 billion [PDF] in new lending.

JPMC/Bear Stearns Loan: The Fed provided a $12.9 billion bridge loan [PDF] to JPMorgan Chase during its acquisition of Bear Stearns.