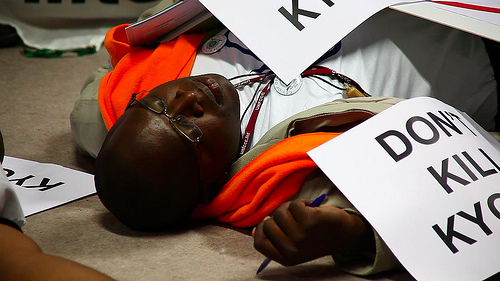 On Monday morning, negotiators from African nations shut down the climate talks at Copenhagen. The Bella Center is rife with rumors that rich countries are trying to do backroom deals with poor nations in a bid to drive a wedge in the developing-country bloc. Is the climate summit on the verge of a meltdown?

Hovering over all this conflict is the ghost of the Kyoto Protocol. As David Corn has explained, there are two separate tracks of talks at the summit—one involving signatories to the Kyoto protocol and one that encompasses the few countries like the US that did not sign the 1997 accord. The African countries want the Kyoto process to be extended because it holds certain developing nations to binding emissions cuts, not mere goals. But the US prefers a brand new political deal that is not legally enforceable. This is partly because US negotiators are apprehensive about getting a formal treaty approved by the Senate and partly because Kyoto’s mandatory cuts don’t apply to developing behemoths like China and India that will fuel most of the future growth in emissions.

When the Danish government drew up an agenda for the next four days of discussions, the Kyoto Protocol track was apparently not included. So developing nations—particularly the G77 bloc of poorest countries and the Alliance of Small Island States—rebelled. The G77’s response has been described by some reporters as a walkout, but in fact its negotiators halted formal talks scheduled to begin at 10:30 a.m. African negotiators have been roaming the Bella defiantly sporting buttons that read “Kyoto, Yes.”

Talks eventually resumed later in the day. But the question of Kyoto’s relevancy is fast becoming Copenhagen’s fiercest battleground. Developing countries have made it clear that they want to keep the Kyoto Protocol as “the foundation on which you build the rest of the architecture,” explains David Waskow, climate change program director at Oxfam America. Today’s delay in the negotiations was significant, he said, because it reveals that poorer nations are coming close to treating a binding successor treaty to Kyoto as a dealbreaker.

These increasingly bitter skirmishes are stalling vital work that must be completed if a final agreement is to be accomplished. And time is running out. Over the next few days, ministers from participating governments are supposed to hammer out the major elements of an agreement, leaving only the most high-level questions to be resolved by the heads of state in the conference’s closing days. (Those last-minute, sensitive subjects will likely include long-term financing to help vulnerable nations adapt to climate change, and details on how each country’s emissions cuts will be monitored and verified.) Heads of state don’t generally show up for such meetings unless they’re confident a deal can be made.

But so far, there’s not much indication that either side will budge when it comes to the question of continuing or expanding the Kyoto agreement. “I don’t think the United States is particularly interested in Kyoto,” said the conference’s executive secretary, Yvo de Boer, on Monday. “I haven’t seen them sign up or want to ratify it.”

The resistance from the US and other industrialized countries to this suggestion has developing nations increasingly suspicious of rich-world motives. (The move last month to punt a final treaty to 2010 didn’t help.) For poorer countries, the Kyoto Protocol is the only enforceable commitment they’ve got. “The Europeans and the US are saying trust us, this is going to lead to a treaty, and the developing countries are saying we don’t really trust you … so we’re going to stick to this system,” said Jake Schmidt, international climate policy director at the Natural Resources Defense Council. We have it, we know what it is, we don’t know what this other thing might be.” Waskow added: “As we go forward this week, these Kyoto Protocol issues are going to have to be fundamentally addressed.”

Now, developing nations fear that the US, Europe, and host Denmark are trying to split their ranks, offering tailored concessions to individual G77 members to get them to relent on the Kyoto question. “The pressure has been to divide the developing countries,” said Bernarditas de Castro Muller, lead negotiator for the G77. Friends of the Earth president Erich Pica expressed concern that developed nations are “working behind the scenes with Denmark to try to manipulate the process.” And if negotiations fall apart as a result? “They’re going to blame the poorest countries.”