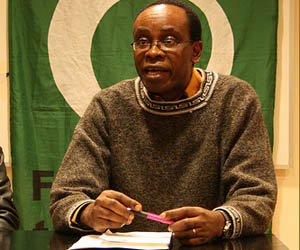 The highlight of my first day at COP15 was a conversation with the extraordinary Nigerian poet and activist Nnimmo Bassey, chair of Friends of the Earth International. We talked about the fact that some of the toughest activists here still pull their punches when it comes to Obama, even as his climate team works tirelessly to do away with the Kyoto Protocol, replacing it with much weaker piecemeal targets.

If George W. Bush had pulled some of the things Obama has done here, he would have been burned in effigy on the steps of the convention center. With Obama, however, even the most timid actions are greeted as historic breakthroughs, or at least a good start.

“Everyone says: ‘give Obama time,'” Bassey told me. “But when it comes to climate change, there is no more time.” The best analogy, he said, is a soccer game that has gone into overtime. “It’s not even injury time, it’s sudden death. It’s the nick of time, but there is no more extra time.”

The solution for Bassey is not carbon trading or sinks but “serious emissions cuts at the source. Leave the oil in the ground, leave the coal in the hole, leave the tar sands in the land.” In Nigeria, where Bassey lives, Friends of the Earth is calling for no new oil development whatsoever, though it does accept more efficient use of existing fields. If Obama isn’t willing to consider those types of solutions, Bassey says, “he may as well be coming [to Copenhagen] for vacation.”

Those kinds of gloves off criticisms are scarce around here. Most groups don’t seem to have figured out their Obama-era strategy yet: Tough love? Gentle encouragement? Blaming Congress? Bassey likened the political discombobulation to what his own country went through when democracy finally replaced dictatorship in 1999. Suddenly they didn’t know how to fight anymore, and it was all about giving the politicians time—despite the fact that the oil companies were still ravaging the Delta and violence was (and still is) spiraling out of control. Sometimes hope can be dangerous.

Speaking of hope, the Scandinavian establishment is still clearly swooning over Obama, showering him with prizes for things he hasn’t done yet and renaming this city “Hopenhagen” for the duration – a not too subtle homage to Mr. Hope himself.

In sharp contrast, one of the most interesting developments here is that Africa is clearly cooling off its Obama love affair. For months the African negotiating bloc has been the toughest and most united voice in the climate talks. At a pre-conference negotiation in Barcelona, the African team walked out en masse–a protest against the paltry emissions cuts proposed by the rich world, led by the U.S.

The African bloc has plenty of dodgy actors in it, of course, and standing up on this one issue does not turn a war criminal into a hero. That said, when it comes to climate change, Africa has emerged here as the conscience of the world– and its best hope of avoiding a disastrously weak deal.

Today, while big NGOs bit their tongues, Lumumba Di-Aping, the Sudanese chairman of the G77 group of developing nations, greeted the news that rich countries will spend a mere $10-billion helping poor states cope with climate change by saying that it was “not enough to buy us coffins.” And when the Danish draft of the final agreement was leaked to The Guardian–incorporating much of Washington’s destructive wish list–it was the Africans who were out protesting it first.

Obama, the son of a Kenyan man, still inspires a great deal of pride among African delegates here, and rightfully so. But the louder message we are hearing is that that the continent has a great many sons and daughters and our collective failure to address the climate crisis is an immediate threat to their survival. As the African delegates chanted at the Bella Center tonight: “We will not die quietly.”

Note: After my interview with him, Nnimmo Bassey reiterated some of what he said to our friends at The Uptake, who are videoblogging the conference. You can check it out here:

This story was reported for The Nation as part of the Copenhagen News Collaborative, a cooperative project of several independent news organizations. Check out the constantly updated feed here. Mother Jones’ comprehensive Copenhagen coverage is here, and our special climate change package is here.