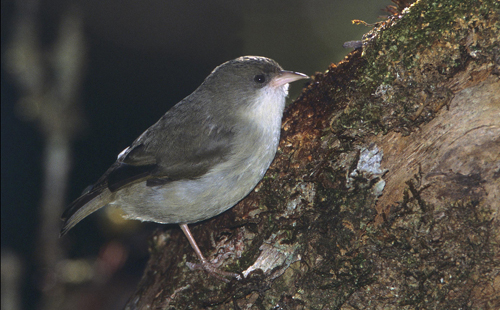 In honor of Copenhagen, here’s one of the US animals the Endangered Species Coalition has dubbed as most in danger from global warming-related threats. You can read the whole list, which includes lynxes, and salmon, and bears (oh my!) here.

One of the animals on the ESC’s list is the dimunitive Kauai Creeper, a 4″ tall bird that’s languished waiting to be listed under the Endangered Species Act. Found only on the Hawaiian island of Kauai, the creeper (also called the Akikiki) has been on the ESA waitlist since 1994. Now, there’s only an estimated 1300 individuals left (down from 7,000 in 1970) most of which live in a 14-square mile patch of swamp.

Sadly, rapid population decline in native birds is not an unfamiliar tale to local biologists. Hawaii is one of the most biodiverse locations in the United States, yet habitat for most animals is restricted due to the island being, well, an island. Not only is land and vegetation limited, invasive species are especially devastating to the small ecosystem. Housecats, for example, prey on adult and juvenile Kauai creepers, feral pigs eat and destroy plants the creepers need for habitat, and mosquitoes carry avian malaria that the birds have no natural defenses against. As global warming ramps up, more and more of Hawaii’s forests will become warm enough (55 degrees F or higher) for mosquitoes to thrive and multiply, potentially increasing disease threats to many animals.

All of this is why biologists and scientists have been lobbying the federal government to save the Kauai creeper now, before it goes extinct like other Hawaiian species. Just last year, American Bird Conservancy (ABC) representatives petitioned the US Fish and Wildlife Service to list the creeper and another Hawaiian bird. “Recent population surveys indicate that these species are on the brink of extinction,” said ABC president George Fenwick. “We absolutely cannot allow these species to become extinct out of lack of interest. The American people can do better.”

There certainly is room for improvement. In 1778, when Captain Cook landed on the islands, there were 71 native bird species: there are now only 45, 31 of which are listed under the ESA or waiting to be listed. Scientists reported the Kauai creeper was in danger as early as 1981. Twenty-eight years and four presidents later, it’s still waiting for protection.