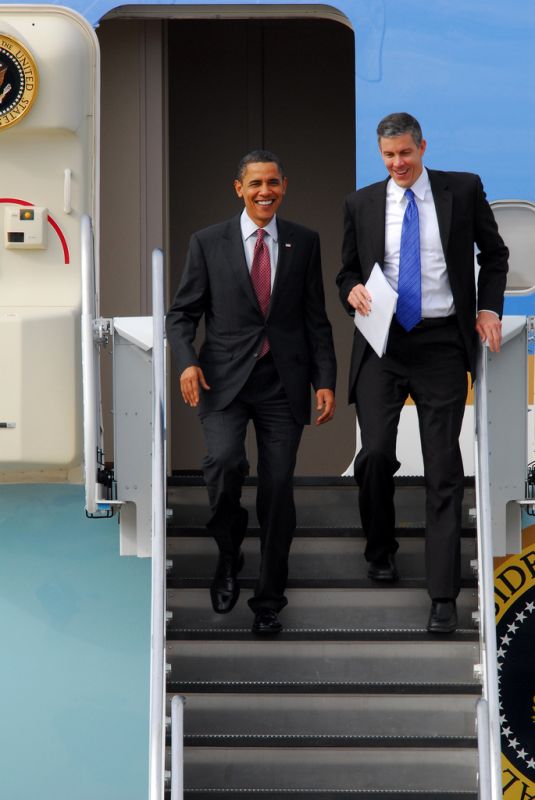 Until last year, Obama’s Secretary of Education choice and pick-up basketball pal Arne Duncan was chief of Chicago’s public schools, a position he held for seven years and one that allowed him to forge a strong relationship with Obama, a former Chicagoan himself. Duncan’s over-the-top reputation as a crusading education reformer had been trumpeted by his supporters, and in his new post Duncan will control Race to the Top funds—$3.5 billion in grants for school districts to turn around failing schools and $4 billion for states to invest in education innovation. However, the latest test scores from Chicago’s public schools have some wondering if Duncan is more hype than performance: and if so, how will it affect the distribution of much-needed grant money?

Soon after Duncan left Chicago in 2008, the city’s 400,000-plus students took the National Assessment of Educational Progress (NAEP), exams which are used as yearly benchmarks of school chiefs’ success. The test results came in this month, but they don’t show what you might expect considering Duncan’s image as an iconoclast. Chicago Public Schools trailed several other districts of comparable size in math performance, and in test score gains made over the past six years, the Washington Post reports.

Districts that did better in math achievement than Chicago include Miami, Houston, and New York, while Boston, San Diego, and Atlanta had greater year-to-year performance gains. But NAEP data is just one way to measure the success of education reform. By firing under-performing and unneeded staff, shuttering schools that seemed impossible to fix, promoting charter school growth, and encouraging teachers with performance pay, Duncan helped raise Chicago’s state and federal test scores along with the city’s graduation rate during his 2001-2008 tenure. This new data does show that although improved, Chicago Public Schools is not leading the pack in education performance like some experts thought it was. Also, that although schools chiefs like Alberto Carvalho, Terry Grier, and Carol Johnson (from Miami, Houston and Boston, respectively) are not as well-known as Duncan, it doesn’t mean they deserve any less recognition by education scholars.