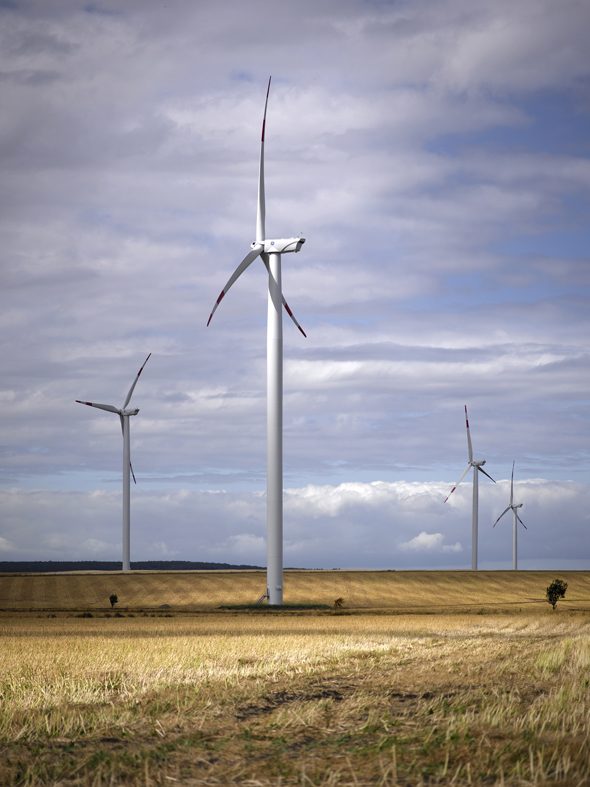 If work goes according to plan, 338 new wind turbines will be producing 845 MW of electricity in north-central Oregon by 2012 — making the “Shepherds Flat” wind farm the largest such power plant in the United States.

This is the first time General Electric’s 2.5xl turbines will be used in the US, but 100 of the large turbines (each of the three rotor blades are 100 meters long — about 330 feet) have already logged over a million hours of energy production in Europe and Asia. The wind farm will be owned by New York-based Caithness Energy with the power generated supplying electricity to Southern California Energy customers.

There’s much to celebrate in the announcement. Most important is the fact that by using wind to produce electricity instead of burning coal, some 1.5 million fewer tons of greenhouse gases will be emitted. Also, according to GE Energy spokeswoman, Milissa Rocker, the new turbines will be made at the company’s Pensacola, Florida, plant. (Previously, all 2.5xls were made in Germany.)

But some features of the wind farm are likely to be more controversial.

As I reported here last month, a recent study by the New Rules Project argued that there are significant benefits to “going local” in energy production, including shorter transmission lines, increased energy efficiency and independence, and the ability to meet state renewable energy portfolio requirements.

Dawn Stover, a science writer who serves on several technical advisory committees for wind projects in Washington state, has written:

“California is already consuming 80% of the wind energy made in the Northwest, which leaves me wondering what will happen when Oregon and Washington phase in their own renewable portfolio requirements. The California Energy Commission is proposing to construct a huge new transmission “collector” line to Oregon, and it’s a one-way highway…”

All of which raises an important, larger question. What tradeoffs are we supporting, albeit unknowingly, in the name of fighting global warming? There will need to be tradeoffs — there always are when large-scale changes occur — but, surely, the decisions should be made democratically and openly.

So, two cheers for the Shepherds Flat Wind Farm. I’m going to hold off on that third one until I know that the Oregon wind farm is the best we can do.

Osha Gray Davidson is a contributing blogger at Mother Jones and publisher of The Phoenix Sun, an online magazine reporting on solar power and the environment from the American Southwest. He tweets @thephoenixsun. (This story appeared first in a different form in The Phoenix Sun.)