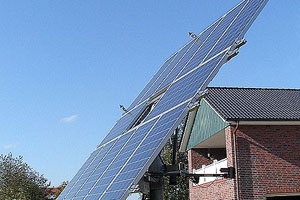 No one said saving the environment would be pretty, but suburban homeowners associations are blocking solar panel installations because they think they’re ugly, according to a recent article in the Los Angeles Times and MSNBC.com. Kevin Drum wrote that his homeowners association (HOA) would go ballistic if he installed panels on his roof, and he’s not alone as homeowners around the nation are battling their associations for the right to mount the energy savers on their property. The HOAs’ aesthetic arguments against energy conservation has pro-solar groups pushing for the federally protected right to solar installation. I contacted advocate Raymond Walker, Standard Renewable Energy’s Senior Vice President, to get the Houston-based solar installer’s take on the right to install panels, even if the neighbors don’t like the color.

Mother Jones: What is Standard Renewable Energy’s (SRE) take on the national battle between homeowners and homeowners associations over the right to install solar panels?

Raymond Walker: SRE believes every US homeowner should have the right to apply a renewable resource to their home. The Telecommunications Act of 1996 allows every property owner the right to install a satellite dish. In short, every homeowner has the right to cable television. SRE strongly believes that it is in the public’s best interest to provide homeowners the right to achieve energy independence.

RW: SRE works closely with property owner associations and homeowner groups to build solar systems that are aesthetically pleasing. SRE is often successful in reaching agreement with these associations, but we project losing nearly $2 million in revenue from those instances where HOAs reject the homeowner’s proposal to install solar.

MJ: A federal version of California’s Solar Rights Act is stalling in the Senate, but the bill—as it’s worded now—would make it illegal for homeowners associations to prohibit the installation of solar systems. What’s SRE’s position in this debate?

RW: All homeowners should be afforded the right to install solar. Several states have already enacted this legislation including Colorado and Arizona. We view these states as leaders and support a federal effort to provide homeowners the right to install and use this form of clean energy. Congress has already passed an extension of the residential solar tax credit. We believe it is reasonable and logical that they now provide homeowners the assurance they can avail themselves of these incentives.

MJ: What would you say to a homeowners association representative who’s against alternative energy for aesthetic reasons?

RW: Today solar arrays commonly go unnoticed as the technology improvements allow them to be placed in various colors and styles to match the existing structure of the home.

Good to know that the inconspicuousness of modern panels may make them more digestable for HOAs concerned with pink-flamingos-on-the-lawn tackiness. Appearance should be an irrelevant determinant for using a technology that reduces demand on a state’s energy grid, benefits ratepayers, and lowers homeowners’ utility bills while providing them with nontaxable subsidies from their public utility company. You do the math.