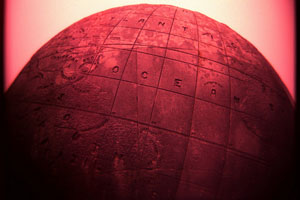 Photo used under a Creative Commons license by flickr user <a href="http://www.flickr.com/photos/boliston/" target="_blank">boliston</a>

That was essentially the message delivered by Jonathan Pershing, the Obama administration’s deputy special climate change envoy, when he held an off-the-record briefing for US nongovernmental outfits at the Copenhagen climate summit on Tuesday. Speaking to about 200 people from various environmental groups, Pershing made the case that a non-binding political agreement—in which the world’s biggest emitters of greenhouse gases would pledge to take various actions to reduce their own emissions—would be more effective than a treaty establishing firm and legally enforceable commitments, according to several people who attended the session. Pershing’s comments mark a significant effort on the part of the United States to reshape the climate negotiations underway in Copenhagen. Though the Copenhagen session was initially conceived as the gathering where a hard-and-fast treaty would be crafted, there is now no chance of that happening. Pershing was trying to turn the absence of such an accord into a plus.

Pershing, a well-known scientist who has worked on climate change for decades, maintained that a binding treaty—which would mandate emission reductions and contain penalties for noncompliance—could easily stall. It would have to be ratified by the U.S. Senate (which would require 67 votes) and winning Senate approval would be no easy feat for the Obama administration. (The Senate does not yet have the 60 votes need to block a filibuster of pending climate change legislation.) Other nations also would have to approve it. He pointed out that the 1997 Kyoto global warming accord, which the US Senate never approved, took five years to be ratified around the world. If Copenhagen did produce a binding treaty, Pershing said, it would be years before it could go into effect. In the meantime, emissions would continue to flow. A political deal, he contended, could kick in immediately, with countries taking individual steps to meet self-established goals for reductions and working collectively to fund clean-energy programs in less-developed nations—and could lead to a binding treaty. World leaders have said they expect a non-treaty agreement would include immediate steps and set longer-term goals.

“This is front-page news,” said one American environmentalist who attended the briefing. “The administration is going for a major reframing.” In what seemed to be an attempt to position the United States to be able to declare success, Pershing was saying that the consolation prize could actually be better than the top prize.

At the briefing, Pershing cited all the unilateral climate-change action that the Obama administration is bringing to the Copenhagen table, including the announcement made this week by the EPA that it would regulate greenhouse gas emissions under the Clean Air Act. He hailed as a positive sign that over a hundred heads of state will be attending the summit. He noted that the United States would commit to contributing $1.4 billion annually to an international climate change fund, and that it was ready to put that money into play quickly.

But an important part of the US mission in Copenhagen is avoiding blame for the absence of either a binding treaty or a robust political deal. To that end, Pershing repeatedly noted that the major developing nations, such as China, India, Mexico, Brazil, Indonesia, have to offer more—that is, be willing to commit to significant reductions and compliance measures. Those nations, he asserted, will be responsible for 97 percent of the future growth in emissions. Without concessions from them, he said, the US Congress would balk at whatever deal comes out of Copenhagen. And when he was asked why the United States was not committed to lowering greenhouse gas emissions to 350 parts per million—a level that many scientists contend is necessary to prevent possible climate change catastrophes—Pershing said that such a target would be impossible to reach without China and the other developing nations agreeing to deeper reductions. He noted that the Obama administration has pledged to reduce emissions 80 percent below 2005 levels by 2050, but he suggested that won’t be sufficient if China and the others do not adopt strict reductions. Moreover, he indicated that returning to 350 ppm—current levels are nearly at 390 ppm—may never happen. Consequently, he said, the United States and the rest of the world must proceed with an “adaptation program” and prepare to deal with the severe consequences of climate change. “We’re stuck,” he remarked, according to one briefing attendee.

Clearly, the Obama administration yearns for a strong agreement of some sort at Copenhagen. But any accord is likely to fall short of what many scientists and environmentalists desire, and the United States does not want to stand accused of being the obstacle to real progress. So at this briefing, Pershing, a man of science and diplomacy, darted back and forth between insisting that Obama administration actions could lead to success at Copenhagen and asserting that Chinese (and Indian and Indonesian and Brazilian) recalcitrance could doom the planet. Negotiating the PR shoals at Copenhagen can be as tough as negotiating the deal.

UPDATE: After this piece was posted, members of the US delegation pointed out that Pershing and the Obama administration still want a legally binding treaty and see a non-binding deal in Copenhagen as a prelude to such an accord. At a press conference the day after Pershing’s off the record briefing, Todd Stern, the US chief climate envoy, said, “The last thing we want is for a political binding agreement to substitute for the effort to get a legally binding treaty.”

This story was reported for Mother Jones as part of the Copenhagen News Collaborative, a cooperative project of several independent news organizations. Check out the constantly updated feed here. Mother Jones’ comprehensive Copenhagen coverage is here, and our special climate change package is here.