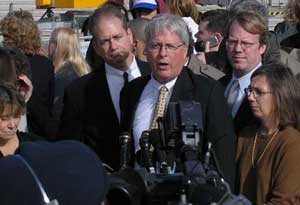 Thursday’s Supreme Court decision striking down limits on corporate spending in elections marks the latest in a remarkable string of victories for a Republican lawyer in Terre Haute, Indiana. James Bopp Jr. did not argue Citizens United v. Federal Election Commission before the high court, but the case was entirely his brainchild.

Bopp, the longtime counsel to the anti-abortion group National Right to Life, has now almost singlehandedly obliterated many of the nation’s relatively modest restrictions on corporate election spending, including the landmark McCain-Feingold campaign finance reform legislation. And he’s done it all in the name of the First Amendment. In 2007, Bopp persuaded the Supreme Court to eliminate limits on corporate funding of television ads in Federal Election Commission v. Wisconsin Right to Life, arguing that the rules were an unconstitutional infringement on free speech. A few months later, he represented Citizens United in its battle with the Federal Election Commission (FEC) over its efforts to air a critical documentary about Hillary Clinton on television during the election season—the case that led to Thursday’s major Supreme Court decision.

As with so many of Bopp’s cases, few people took the Citizens United challenge seriously in the beginning. During one hearing in early 2008, US District Court Judge Royce Lamberth actually laughed at Bopp for comparing the Citizens United film—which portrayed Hillary Clinton as a European Socialist—to investigative news shows like 60 Minutes. Since then, judges, good government groups and various other political actors have learned that Bopp is not to be laughed at. After the Supreme Court decided to take the case, Citizens United hired renowned high court litigator Ted Olson to handle the oral arguments, but the case bears all the trademarks of Bopp’s handiwork.

Bopp has a knack for finding provisions in campaign finance laws that have been taken for granted for decades as acceptable restrictions on corporate speech. Then, he makes ACLU-like arguments that such rules violate the First Amendment. Part of Bopp’s genius lies in his choice of clients. Although his cases ultimately benefit powerful corporations, their public faces are usually small advocacy groups like Wisconsin Right to Life or Citizens United that are seeking to participate in political debate. Perhaps most impressive, he crafts cases that appear persuasive to people who do not share his agenda (he is a staunch conservative and member of the Republican National Committee). As a journalist and civil libertarian, I was deeply conflicted about the Citizens United case. After viewing the Hillary documentary, I thought Americans ought to be able to watch it on television if they wanted to, and was sympathetic to Bopp’s argument that the campaign finance rules in this case resulted in censorship. Clearly the Supreme Court was, too.

Not content with blasting 100 years of campaign-finance precedent out of the water, Bopp is taking aim at other established principles of American election law. His firm is currently representing anti-gay marriage forces in Washington State, California and Maine, where he has filed lawsuits challenging basic transparency provisions in those states’ election laws. In October, Bopp persuaded the Supreme Court to overturn a Ninth Circuit decision allowing the disclosure of the names of people who signed petitions to put an anti-gay marriage measure on the Washington State ballot. In California, Bopp has sued state elections officials in an attempt to have state donor disclosure rules deemed unconstitutional. Bopp has argued that laws requiring donor names to be made public subjected supporters of Proposition 8—which struck down gay marriage in the state—to harassment that violated their free speech rights. That case is still pending.

Bopp’s firm has filed a similar suit in Maine, where the state’s ethics and election commission is investigating the National Organization for Marriage for failing to register as a political committee and reveal its donors during its work on a ballot initiative that outlawed gay marriage in that state. As he did in California, Bopp has argued that the disclosure law is unconstitutional. A federal judge disagreed and ordered the National Organization for Marriage to reveal its donors, but Bopp’s firm is fighting the decision. That case is likely to also end up before the Supreme Court in the not-so-distant future. As with Citizens United, it’s hard to imagine that such a core provision of election law—in this case donor disclosure—could be struck down. But good government groups and campaign finance watchdogs would do well not to underestimate Bopp’s power of persuasion.