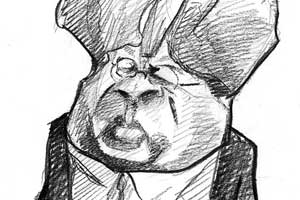 Thursday’s Supreme Court decision striking down limits on corporate spending in elections marks the latest in a remarkable string of victories for a Republican lawyer in Terre Haute, Indiana. James Bopp Jr. did not argue Citizens United v. Federal Election Commission before the high court, but the case was entirely his brainchild.

Bopp, the longtime counsel to the anti-abortion group National Right to Life, has now almost single-handedly obliterated many of the nation’s relatively modest restrictions on corporate election spending, including the landmark McCain-Feingold campaign finance reform legislation. And he’s done it all in the name of the First Amendment. In 2007, Bopp persuaded the Supreme Court to eliminate limits on corporate funding of television ads in Federal Election Commission v. Wisconsin Right to Life, arguing that the rules were an unconstitutional infringement on free speech. A few months later, he represented Citizens United in its battle with the Federal Election Commission (FEC) over its efforts to air a critical documentary about Hillary Clinton on television during the election season—the case that led to Thursday’s major Supreme Court decision.

As with so many of Bopp’s cases, few people took the Citizens United challenge seriously in the beginning. During one hearing in early 2008, US District Court Judge Royce Lamberth actually laughed at Bopp for comparing the Citizens United film—which portrayed Hillary Clinton as a European socialist—to investigative news shows like 60 Minutes. Since then, judges, good government groups, and various other political actors have learned that Bopp is not to be laughed at. After the Supreme Court decided to take the case, Citizens United hired renowned high court litigator Ted Olson to handle the oral arguments, but the case bears all the trademarks of Bopp’s handiwork.

What happened yesterday at the Supreme Court profoundly changes America. Now corporations will have completely unfettered ability to crush any candidacy they don’t like. More than ever, we can see who owns this country. We see what the pillars of the Court have become: a continuation of the pinstripes on the big corporate sleeve. Our ability to fight them is now simply whisked away by five reactionary justices, all appointed by Republicans. It is time to be direct. The influence of the Republican party and any Democrat who thinks of his sponsors first and the people second is a cancer on this country. And now that will be everyone in Congress. It is already a corporate arm, but this makes it more overwhelmingly and grotesquely so. We must realize that this is complete Orwellian control on an obscene level. If we can take this back, it will require everyone’s seeing this as the emergency it is. As Lincoln said, “We must disenthrall ourselves, and then we shall save our country.”