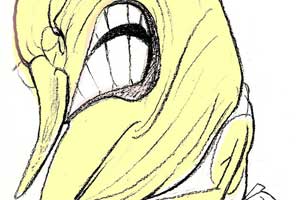 Dick Cheney seems to have a kind of Tourette’s problem, where he blurts out ugly words about Obama for no reason other than perhaps a medical one. He has Politico on speed dial and just erupts. The latest is his familiar terrorphobe tune, this time about Yemen. True: We and the world have a problem. It’s the Blowback he helped set up. And it’s his specific role in the development of the Qaeda gang in Yemen we have to deal with now. In this piece at Huff Post, Marc Ginsberg reminds that Cheney authorized the release of Said al-Shihri and others who became the head of the Yemeni Office. No wonder Mr. Macho is upset. He’s got stains all over his Grand Old Pantywaist.

In 2007, then Vice President Dick Cheney personally authorized the release of 11 Saudis from Guantanamo Bay, who then passed through a leaky Saudi halfway house terrorist rehabilitation program to rejoin Al Qaeda. Two of the 11 former detainees took the express jihadi underground railroad to rejoin Al Qaeda in Yemen.

In February, 2009, the New York Times reported that U.S. counterterrorism officials confirmed that one of the Cheney repats was Said Al-Shihri, who became the deputy leader of the Yemeni branch of Al Qaeda, and that he was suspected of being involved in a deadly attack on the U.S. embassy in Yemen in 2007. Shortly after the attack, Shihri appeared in an Al Sahab Al Qaeda video production along with another Cheney repat identified as Abu Hareth Muhammad al-Awfi, who also rejoined Al Qaeda in Yemen.

Based on a comprehensive review by the Defense Intelligence Agency 14% of the 530 Gitmo detainees released through Cheney’s direct approval (74 to be exact) have either been identified as reengaging in terrorism or suspected of doing so.

So, let me get this straight. Cheney authorized the release of unrepentant hardened terrorists to his Saudi friends. Having cut their shackles from the Saudis, these escapees are now training and recruiting the likes of Umar Farouk Abdulmutallab and threatening to attack the U.S. embassy in Yemen, and Cheney has the chutzpah to accuse Democrats of being soft on terrorism!

At best, Cheney’s 2007 authorization to transfer Gitmo detainees to Saudi Arabia represented a fawning leap of blind faith in Saudi assurances that these detainees were perfect guinea pigs for an unproven terror rehab program and would no longer pose a threat to them or to us. However, the alarming recidivism rate has had dire and direct consequences on American security.

At worst, Al Qaeda in the Arabian Peninsula and its subchapter in Yemen should dispatch to Cheney a warm jihadi thank you note for playing such a direct role in their reconstitution, their resurgence, and their increasing danger to the U.S. homeland and our diplomats in Yemen.

Ordinarily, had Cheney kept reasonably quiet like his former boss instead of pretentiously anointing himself the sole defender of America’s safety and security (as if every decision he made kept America safe), his decision to authorize the release of Al Qaeda operatives now back in the fight against the U.S. in Yemen and elsewhere would not have warranted a revisit — just another footnote in the history of Cheney’s imperfect logic where he is often wrong, but never in doubt.

However, in view of Cheney’s willfully inaccurate partisan attacks he deserves to now be held accountable for the Yemeni Al Qaeda terror sanctuary he helped man through his own micromanagement of Gitmo detainees and misguided deference to his Halliburton buddies in Saudi Arabia. As a result, America is a whole lot less safe because of Mr. Cheney’s own decisions.