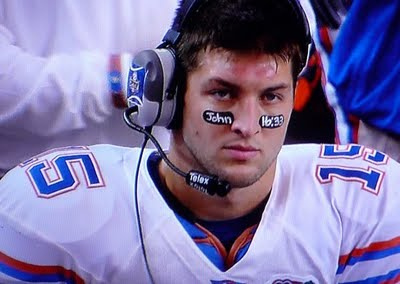 I have a general, albeit sometimes irrational, distaste for quarterbacks. There’s something about their deified status, the fact that they’re often positioned as Great White Hopes on mostly black teams, their ‘me’-in-team attitudes; I admittedly look for reasons to knock them down a peg. Joe Theismann: ridiculous (he changed the pronunciation of his name, ‘THEES-man,’ to rhyme with Heisman, as in trophy). Joe Montana: privileged (Joe Cool played for the wine-and-cheese 49ers and had the best receivers in the biz). Peyton Manning: whiner (no-huddle does not have to mean all-tantrum). Michael Vick: dog hater (no explanation nec). I could go on, but this isn’t a sports’ blog, so I’ll get on with it:

Tim Tebow. The Heisman-winning, Florida Gators’ QB is headed to the NFL, and for the past few years he’s been the darling of college football. He’s capitalized on that exposure, declaring his virginism and etching bible passages into his eye-black for every game. Now Tebow is taking televangelism to a whole new level: the Super Bowl. Even better, the still-college boy is going to star in a commercial in the Super Bowl. Now everybody knows that the ads are the most-watched, most memorable, and most expensive part of the 6-hour affair (halftime is a close second). Tebow and his mom’s  Super Bowl ad is sponsored by James Dobson’s Focus on the Family. Tim’s mom will tell America how she was young and not sure she wanted a baby, but then she had Tim who’s now a star about to make gobs and gobs of money (she probably won’t say that last part, but you’ll get the picture). Ergo, you’d be crazy to consider an abortion, ladies, and gents and those not of child-bearing age, don’t even think about supporting a woman’s right to chose, because how could you choose not to gestate and give life to a person as successful and handsome as Tim Tebow?

This “false choice,” as TAPPED’s Monica Potts so rightly calls it, is fucked. Sorry, it just is. You cannot tell a woman that she might give birth to the next superstar, the next president, the next great thing, or even the next maybe-not-great-thing but still-deserving-of-your-love human being. Because no matter what you might believe, or I might believe (and the idea of having an abortion is a horrifying prospect to me, as it is to most pro-choicers, for the record) when it comes right down to it, when it’s 3rd-and-25 and you’re deep in your own territory, Tim, you’re your only coach in this scenario. What you won’t hear in this commercial is that a woman might die giving birth, or go broke after she has the child, or lose her own future and compromise her kid’s. All these things are ‘maybe’s,’ and women and their partners in this situation are left with difficult, horrible choices no one wants to be beset with, but in the end this simply isn’t anyone else’s, including Tim Tebow’s, damn business.