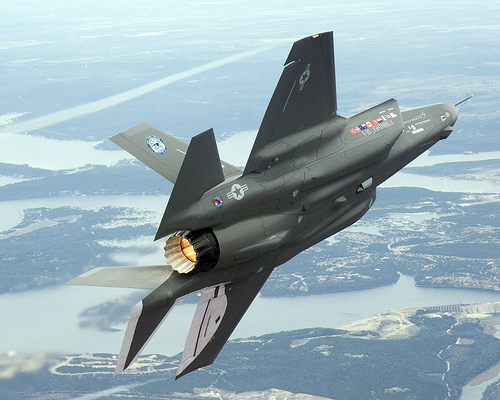 A pillar of Obama’s State of the Union address on Wednesday, we’re learning, will be a three-year spending freeze in domestic areas like education, transportation, housing, national parks, and farm subsidies, among others. Reeling from Massachusetts Sen.-elect Scott Brown’s victory last week and a growing disenchantment with his ambitious domestic agenda (health care, climate change, financial reform), Obama’s move is no doubt intended to show he’s tough on the deficit, and to allay fears among fellow Democrats staring down a potentially bleak November election season. Its political utility aside, the spending freeze, as it stands now, is a wrongheaded, ill-fated move—not only because it targets areas where more funding is needed, but it exempts the most pork-riddled, wasteful area of them all: defense spending.

Filled with billion-dollar boondoggles and pie-in-the-sky projects (weaponized cyborg bugs, anyone?), if Obama wants to freeze—or even cut—government spending, the defense budget is the first place he should look. Administration officials say the three-year freeze will save $10 to $15 billion in the 2011 fiscal year and $250 billion over the next decade. By comparison, the new war budget Obama requested totaled a record $708 billion—for one fiscal year. Perhaps some of that total could be trimmed. Or the president could crack down on over-budget weapons programs, or “overruns,” which as Mother Jones has reported last summer, alone add up to $296 billion. (Our total weapons commitments, overruns included, reach a staggering $1.6 trillion.)

While we’re at it, here are a few other defense expenditures on which Obama could freeze spending:

That’s to say nothing of the thousands of dollars in booze and snacks official military escorts bought US politicians on foreign trips, as the Wall Street Journal reported—a small but undoubtedly wasteful sum.

Yet Obama apparently has no plans to trim bloated defense spending, while pulling back in areas that need the money more than ever. For instance, many economists—among them White House economic adviser Christina Romer, Moody’s Economy.com chief economist Mark Zandi, and Princeton’s Paul Krugman—say more stimulus is needed to ensure a vigorous recovery (and not the jobless one we’re seeing now); the new freeze, however, likely signals the end of any more stimulus funding. State governments need as much help as they can get, as two dozen face unemployment funds in red and worsening by the day. The housing crisis rolls on mostly unabated—the administration’s $75 billion flagship homeowner relief is a bust, and foreclosures set new records in 2009. And education—perpetually under the knife when budget cuts are made—should be the last place the president and his team look to squeeze out savings. While American K-12 students’ achievement in the classroom continues to slip behind the rest of the world,  access to higher education disappears owed to fewer class offerings, higher tuition costs, and layoffs on campuses nationwide among faculties and staffs.

All of which is to say, before slashing already anemic domestic budgets, Obama should look hard at the billion-dollar planes and busted battleships weighing down our defense budget. With this spending freeze, Obama clearly wants to hone his tough-on-the-deficit image, but he’ll do more harm than good with the cuts he’s envisioning right now.