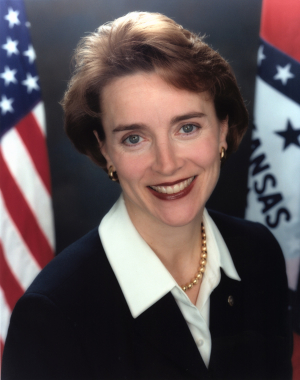 Is Blanche Lincoln the dirtiest member of Congress? The League of Conservation Voters thinks so. The group named the Arkansas Democrat the inaugural member of their 2010 Dirty Dozen—a list of top targets for environmentalists to unseat in the next election.

Lincoln is “one of the worst Democrats in the US Senate,” said Tony Massaro, the League’s senior vice president for political affairs. He cited Lincoln’s opposition to climate legislation and her support for efforts to block the Environmental Protection Agency from regulating greenhouse gas emissions as reasons that Lincoln is the first person to be named to their 2010 list (the rest will be released in the coming weeks.) Lincoln has received a lifetime voting score of just 49 percent on environmental issues from the organization—the lowest of all Democratic senators up for reelection this year.

Massaro pointed to a recent poll from Democratic polling firm Benenson Strategy Group that found that 55 percent of Arkansans support passing a bill that includes a cap on carbon dioxide pollution and measures to expand use of renewable energy. “She is out of step with the majority of people in Arkansas,” said Massaro.

Lincoln’s chances of reelection look tenuous at best, as she has come under fire from Arkansas Republicans for her support of health care reform. At least five Republicans are expected to file to run in the primary, and more may jump in before the March 8 deadline. The state Democratic Party has been openly considering whether another Democrat might fare better in the election.

The League of Conservation voters spent $1.5 million during the last election cycle targeing Dirty Dozen members, and has spent hundreds of thousands of dollars on individual races. Half of the candidates they’ve targeted to date lost their election bids.

The League is also going after Steve Pearce, a GOP candidate for New Mexico’s second congressional district. He represented the district from 2003 to 2009, and made an unsuccessful bid for the Senate in 2008. He has a 3 percent lifetime voting record from the organization.

UPDATE: Lincoln’s office issued a statement defending her environmental record on Thursday afternoon, calling LCV a “liberal” and “extremist” group and vowing that “threats from outside special interest groups will not deter her from remaining a strong and independent voice for Arkansas.”

“I have built a practical, common-sense record on energy and environmental issues while working closely with Arkansas environmental advocates,” said Lincoln. “Threats from extremist groups from outside our state tell me I’m doing something right for Arkansas.”