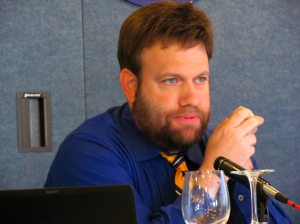 Republican pollster Frank Luntz—the brains behind Newt Gingrich’s “Contract With America” and the man who coined politically potent phrases like the “death tax”—wants to help environmentalists in their push for legislation to combat climate change. His advice? Stop talking about climate change.

The environmental community is “fighting the wrong battle,” Luntz announced on Thursday at an event to mark the release of a new report by his polling firm, The Word Doctors, outlining strategies to help marshal public support for a climate bill. “The least important component of climate change is climate change.”

Luntz’s report, “The Language of a Clean Energy Economy,” finds that the majority of the public across the political spectrum is convinced that global warming is happening and caused at least in part by humans. But, Luntz says, talking about the problem won’t win support for the legislation that would solve it. Among both Democrats and Republicans polled by his firm, addressing climate change was the least important reason to support a cap-and-trade policy.

So what should environmentalists say instead? Luntz suggests less talk of dying polar bears and more emphasis on how legislation will create jobs, make the planet healthier and decrease US dependence on foreign oil. Advocates should emphasize words like “cleaner,” “healthier,” and “safer”;  scrap “green jobs” in favor of “American jobs,” and ditch terms like “sustainability” and “carbon neutral” altogether. “It doesn’t matter if there is or isn’t climate change,” he said. “It’s still in America’s best interest to develop new sources of energy that are clean, reliable, efficient and safe.”

Luntz isn’t the first public opinion expert to suggest this course of action—but until recently he was better known among environmentalists for furnishing the GOP with sophisticated strategies to kill any prospect of climate action during the Bush years. In 2002 Luntz authored an influential memo advising Republicans to green their public image while sowing public confusion about global warming. Republicans should “continue to make the lack of scientific certainty a primary issue in the debate” because otherwise, he warned, “[s]hould the public come to believe that the scientific issues are settled, their views about global warming will change accordingly.” Two Bush initiatives that were vintage Luntz: the timber-industry-friendly “Healthy Forests Initiative” and the “Clear Skies Act” that loosened restrictions on polluters.

Many Republicans still seem to be working from Luntz’s playbook. But he acknowledged at Thursday’s event that the effort to muddy the public discussion over the science of climate change had failed. “It doesn’t matter whether you call it climate change or global warming,” he said. “The public believes it’s happening, and they believe that humans are playing a part in it.” In fact, Luntz warned that if Republicans continue to dispute climate science it could hurt them politically. Instead, he said, the GOP should be engaging in the debate over to solve America’s energy problems. “You have to do something new, and you have to do it better,” he said. “If you are representing the polices of the past, you will be kicked out.”

Now that Luntz has changed course on climate, is his advice to environmentalists any better than his former counsel to the GOP? As it happens, many advocates of climate legislation have already started moving in the direction that Luntz is proposing. The cap-and-trade bill that passed the House last year is titled  the “American Clean Energy and Security Act,” and the version currently circulating in the Senate version is called the “Clean Energy Jobs and American Power Act.” (The Senate bill even eschews any talk of cap-and-trade, though Luntz balked at the Democrats’ alternative term—”Global Warming Pollution Reduction and Investment”—because it uses the words “global warming.”) President Barack Obama rarely talks about climate, focusing instead on jobs and economic growth. So far, though, all the positive spin hasn’t made the hard task of passing legislation any easier.