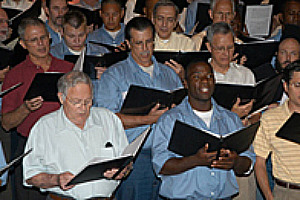 New York (and replicated elsewhere)
PROGRAM: After Congress eliminated Pell Grants for prisoners in 1994, effectively ending access to higher education in prison, Bard stepped in to offer inmates a chance to graduate with degrees “identical to diplomas we give on campus.”
ANNUAL COST: $1.2 million, about $4,000 per inmate, all from private sources.
TAKEAWAY: Courses this year include “Power Part I: From Machiavelli to Marx.”

Kansas City
PROGRAM: Brings together church choir directors and singers with inmates at the Lansing state prison. Choir held packed concerts at area churches until budget cuts forced the show behind prison walls. Concerts are now taped—along with messages from inmates—for play at the churches.
ANNUAL COST: Part of a five-site state arts-in-prison program that costs $200,000 altogether.
TAKEAWAY: According to a 2009 study the program gives inmates “opportunities for transformational change” and “a sense of group responsibility.”

Blythe, California (and several other state prisons)
PROGRAM: Incarcerated veterans collect recyclables and throw prison pizza parties to raise dough for charity.
ANNUAL COST: Free to taxpayers. Inmates pay for pizza parties with their meager prison wages.
TAKEAWAY: “They do four pizza sales a year, and we have over 4,000 inmates,” says Michael Alonzo, the prison’s spokesman. “If they make a dollar profit for each pizza, you see how they can raise money pretty quick.” The club has raised $250,000 total; recently $10,000 went to highly specialized wheelchairs for veterans of Iraq or Afghanistan. “They’ve kinda taken that personal,” says Alonzo. “They understand the government’s not paying for those chairs.”

National
PROGRAM: Founded by the nonprofit writers’ group after the 1971 Attica Prison riot, the program publishes a writing handbook, matches inmates with professional writers as mentors, and sponsors an annual prison writing award.
ANNUAL COST: $49,000, mostly donated by PEN members.
TAKEAWAY: Selections from the program’s writing contest are featured at a celeb-studded (John Turturro, Eric Bogosian, and Mary Gaitskill) gala reading. Winners this year included “I Wore Chains to My Father’s Funeral,” by Charles P. Norman: “After they’d retrieved their nine millimeters, their ankle guns, their Buck knives, canisters of pepper spray, police batons, and 12-gauge shotgun from the trunk, the car backed out, and we were on our way.”

New York
PROGRAM: 2 percent of kids under 18 have a parent in prison. Osborne teaches 5,500 inmates each year parenting and other skills.
ANNUAL COST: $14.2 million, mostly from government grants.
TAKEAWAY: Program director Tanya Krupat recalls helping kids in a support group in New York City make cards to send to their moms upstate. She worried that the “kindergarten arts and crafts supplies” would turn off teens. “But every kid, even the coolest of the cool, with not a word of protest, sat down with glue and crayons and made the most passionate cards for their mom.”