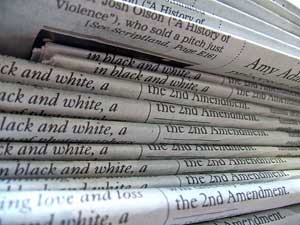 This morning, Kevin commented on the announcement by the New York Times that it intends to build a paywall around its content… starting next year:

This is sort of odd. Why wait until 2011? The technology for tracking visits isn’t very hard to implement. And why announce this without answers to basic questions like “how many stories can I read for free?”

Reading between the lines of their carefully worded announcement, I think the answers to his questions are pretty clear. The Grey Lady has an out-sized presence in the American media market. Any move she makes is both influential—and unsettling.

The lead time allows the Times‘ other competitors here and abroad to carefully rethink their online media strategies. The current online model practiced by most major newspapers—put everything on the Web for free—is less of a strategy and more an accident of history. The Internet pounced on a profitable and antiquated industry and has been diverting content and revenues it ever since. On the bright side, this change has brought about the advent of blogging and an unparalleled era of free information. But as Times‘ media critic David Carr noted, “people who remain reflexively bullish on free ignore the fact that the clock is ticking on many of the legacy businesses that produce that content.” (For “legacy business,” see the Los Angeles Times.)

If other news sites don’t choose to fight over the NYTimes.com readers repelled by its paywall, a surprise beneficiary of their new strategy could be Steve Brill’s much-hyped Journalism Online venture. Carr dismissed working with third parties like Brill, Amazon, or Apple, saying, “the golden rule in digital matters is that the man in the middle makes the gold.” Still, smaller rivals like the LA Times or Chicago Sun-Times could find working with a middleman preferable to being out of work.

The early announcement also allows NYTimes.com visitors and operators time to measure each other up. Readers can begin thinking about how much they value the site’s exhaustive, multimedia coverage of Haiti, politics, style, business, and much else—or they can start looking for a free website to get their breaking news. And if they are only occasional visitors to NYTimes.com, the change is unlikely to adversely affect them. The metered system proposed by the New York Times Company will allow readers to see some articles for free each month.

In turn, NYTimes.com can test the water in the buildup to their metered wall. If readers begin preemptively avoiding the site, that’s valuable information—not cause to abandon the scheme. NY Times Co. can take that trend into account when they calibrate the free-stories-to-subscription-price ratio they need to bring in online subscribers without decimating traffic-driven online advertising revenues.

And, as Reuter’s Felix Salmon observed in his examination of the economics of the paywall, the metering system they plan to adopt is dynamic: “When advertising is strong, access can be ramped up, and when advertising is weak, it can be restricted, in an attempt to maximize subscription revenues.” But getting it about right from the get-go is important so the site doesn’t annoy too many visitors, who’ll become accustomed to having set number of freebies.

This is an important step forward for the Grey Lady. I only hope the rest of the news industry follows her lead.