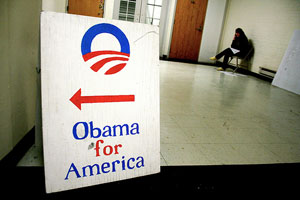 When Barack Obama won the election in November 2008, one question was, what will he do with his army? His ultra-wired campaign had attracted over 13 million volunteers and donors plugged into Obama HQ via email and text messages. The future of this grassroots movement had to be decided, and eventually—perhaps too slowly—Obama for America (the campaign entity) morphed into Organizing for America and became an arm of the Democratic Party. And among the politerati, there’s been much discussion over the past year whether Obama has made the best possible use of his supporters through OFA.

TechPresident.com, a “crosspartisan group blog” that explores how government and politicians use the Internet, commissioned journalist Ari Melber to evaluate OFA. In a 73-page report, Melber notes that the outfit “successfully mobilized…a new corps of super-activists” during 2009, mostly regarding health care reform. But he reports that congressional aides do not consider OFA “a major or powerful force on Capitol Hill.” He writes: “In 2009, OFA focused more on supporting and thanking allied Members than pressuring resistant Democrats or Republicans.” That sure makes OFA seem a tad wimpy.

The most intriguing part of Melber’s report is the section featuring the comments of former Obama campaign staffers. They are quoted anonymously, but a powerful theme emerges: the Obama White House is not as interested in grassroots action as the Obama campaign was. Melber reports:

Most interviewees stressed that OFA’s current structure, within the DNC and reporting to the White House, put significant constraints on OFA’s activities. In this narrative, while the campaign operated as a single, holistic strategic entity, OFA is now inevitably subsumed in a sprawling organizational matrix, including the White House, Congress and party infrastructure. Thus it can be easily outranked. “It’s very, very hard, because you’re being led around by the White House, which has shifting strategy and different political concerns,” noted one former staffer. The organizational chart makes it hard to quickly answer practical organizing questions, this person observed, or even settle on the right “political rhetoric” for communicating with supporters. This former staffer was also concerned about the commitment to a robust OFA at the White House, a view echoed by other campaign staff.

The White House is not only a bureaucratic hurdle, according to some former campaign staff, it has emerged as an intramural opponent with diverging strategic priorities. Unlike the presidential campaign leadership, one ex-staffer contended, White House management is simply not very enthused about grassroots organizing, or convinced of the potential benefits of mobilizing OFA’s millions of members.

It’s complicated, because OFA is not a campaign—they are an arm of the White House. They have to do what White House tells them. The White House, it seems to me, Rahm and whomever else, [they don’t] give a crap about this email list and don’t think it’s a very useful thing. They want to do stuff the delicate way—the horse-trading, backroom talks, one-to-one lobbying. So they see it as more effective to get [Deputy Chief of Staff] Jim Messina on the phone with all these folks; the way to deal with this is to get on the phone. [They say] ‘unleashing a massive grassroots army is only going to backfire on us.’ But at the same time, they have unleashed it, letting it call Congress….

For the sake of relationship-building, it seems to me there are two warring things. One is pleasing the White House. The other is pleasing this 13 million-person list. You can’t do both, but it seems to me that there has been not enough emphasis on [the idea that] this is the most unprecedented list by far in political history, with the potential to be an incredible tool for social change and a legislative hammer to help pass progressive reform. Yet it doesn’t feel like it’s being treated that way. It feels a little like [the White House thinks], ‘Here’s this list, we don’t have to change the way we do anything to please that list. Just have that list conform to the way we do things.’ The consequences for that are that it’s going to weaken the list, and more and more people are going to unsubscribe. It will still be huge, but if they do finally want to unleash it, and turn it into a powerful thing, what then?

I don’t think the White House is interested in using a grassroots organizing network to really advance their agenda. I can say that flat out. And I think the backstory, if you’re talking about the White House [staff]—and not OFA [staff]—is [the people] working at the White House are the [campaign] communications people, who never, I don’t think, fully appreciated the network of activists in the first place. So, that means that when they’re there, [this organizing] becomes an extension of a larger communications and messaging strategy, and much less a concerted effort to use a lot of people who care a lot [about] creatively pushing through a legislative agenda.

What happens with OFA is certainly what pundits often derisively call “inside baseball.” But it’s a clear bellwether: just how conventional will Obama’s presidency be? So far, Obama has mostly stuck to familiar presidential pathways when it comes to using power, communicating with the public, and interacting with the citizenry and his supporters. (His use of electronic town halls and the like have been mostly gimmicks.) Though he entered the White House with a network unlike any amassed by a predecessor—both larger and more engaged—he has not tried to deploy it to reshape the operating system of Washington. And Melber’s report suggests that doing so is not on the White House’s agenda.