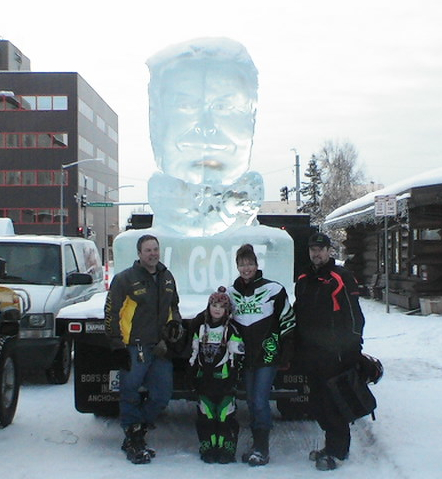 Photo courtesy of <a href="http://www.compeaus.com/frozen.html">Compeau's</a>.

A two-ton ice sculpture of Al Gore has been erected in front of a liquor store in Fairbanks, Alaska, as an homage to climate change skepticism. Via Treehugger, we learn that this will be the second giant frozen Gore head displayed in the state; the first, displayed last year at this time, even drew a visit from Sarah Palin.

While Palin’s public embrace of Frozen Gore and climate change denialism isn’t unexpected, it is fun to take a look at her evolution on the issue over the past few years, from tepid skeptic to full-blown denier. A brief history:

During her 2006 campaign for governor: “I will not pretend to have all the answers.” She also cautioned against “overreaction” on climate change. Later, a spokesperson told a reporter, “She’s not totally convinced one way or the other. Science will tell us. … She thinks the jury’s still out.”

August 29, 2008: “A changing environment will affect Alaska more than any other state, because of our location … I’m not one, though, who would attribute it to being man-made.”

September 11, 2008: “Show me where I have ever said that there’s absolute proof that nothing that man has ever conducted or engaged in has had any effect, or no effect, on climate change.”

October 2, 2008: “There is something to be said also for man’s activities, but also for the cyclical temperature changes on our planet.” She added, “I don’t want to argue about the causes.”

And finally, her op-ed in the Washington Post last month: The op-ed focuses on how climate change has been “politicized” – but of course, not by her. Here acknowledges “the impact of changing weather patterns” in her state, but implys that they are “natural, cyclical environmental trends” and “we can’t say with assurance that man’s activities cause weather changes.” Thus, she concludes, “any potential benefits of proposed emissions reduction policies are far outweighed by their economic costs.”

The kicker to this most recent story on Frozen Gore and Palin, though, is the final paragraph in the Associated Press piece on the sculpture:

Climate change scientists say Alaska has warmed by 3 degrees Fahrenheit during the past 50 years. The average temperature for 2009 was 27.8 degrees in Fairbanks, about one degree warmer than normal, said Rick Thoman, a meteorologist with the National Weather Service.

Well, guess it doesn’t matter as much now that she’s not looking to be elected in-state. The lofty goal of seeking national office as a Republican basically requires one to shed any realism on climate.