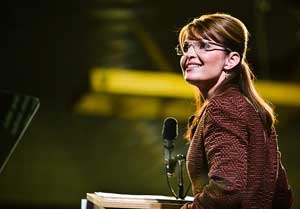 Will Sarah Palin’s Tea Party dinner be a bust?

Tea Party Nation founder Judson Phillips likely assumed that scoring a dinner speech by the former Alaska governor and GOP vice presidential candidate would guarantee a huge turnout for his National Tea Party Convention, scheduled to start Feb. 4 at Nashville’s Gaylord Opryland Hotel. But according to Tea Party insiders, the tickets for the Palin banquet aren’t selling—and some conservative activists who have already paid to attend are now demanding refunds. With the controversial event shaping up to be a potential flop, some Tea Partiers are urging Palin to cancel her speech to avoid a humiliating public relations disaster.

The problems began after news broke that Phillips intended to profit from the convention—which costs $549 a person for access to both the conference and Palin’s banquet, or $349 for a ticket to the dinner alone. With one prominent conservative blogger charging that the event seemed “scammy,” several key sponsors yanked their support, including the National Precinct Alliance, the American Liberty Alliance, American Majority, and the Federation for American Immigration Reform. As the rash of bad press continued, this week Rep. Marsha Blackburn (R-Tenn.), announced that she’s considering pulling out as a convention speaker. And some Tea Party activists think Palin should join her. According to internal convention planning documents obtained by Mother Jones, Palin will be paid $115,000 to address the attendees—as they dine on steak or lobster. To some Tea Partiers, this lavish affair sounds suspiciously like an exclusive GOP fundraiser and a betrayal of their grassroots movement. (In mid-January, Palin told Fox News’ Bill O’Reilly that she will not profit from her appearance at the convention, suggesting she would donate her speaking fee to Republican candidates. But she has not provided any details on that, and a Palin spokesperson did not respond to requests for clarification.)

Phillips has bragged publicly that the tickets covering both the convention and the speech have sold out. Yet Tea Party insiders say that’s not the whole story. Anthony Shreeve is an activist in Dandridge, Tenn. who quit the convention organizing committee over the expensive ticket prices. He says he has it on good authority that most of the approximately 500 speech-only tickets have not been sold. Shreeve adds that Phillips “isn’t going to sell any more,” and says other would-be attendees have been demanding—and receiving—refunds. Late on Tuesday afternoon, I tested his claim by attempting to buy 10 tickets to the dinner. If I’d been prepared to shell out $3,587.10, that would apparently have been no problem. “I really hope that Sarah Palin doesn’t come to this event because it’s going to be really embarrassing for her to walk into a half-empty room,” says Shreeve.

According to the internal Tea Party Nation documents, organizers were depending on Palin’s speech to lure a much larger crowd to the banquet in order to turn a profit. Based on cost estimates used by the organizers in the planning documents, if 1,100 people attend the banquet (600 of whom would also attend the convention), the event would cost the organizers about $401,200, including Palin’s $115,000 speaking fee. If all the tickets are sold—both the $549 all-access tickets and the $349 dinner-only tickets—Phillips’ group would net about $102,700. But if few of the banquet-only tickets are sold, the organizers are likely to end up seriously in the hole, depending on how much the group had to pay in advance to the hotel, which is charging $120 per person for the dinner. Shreeve observes, “It wouldn’t surprise me if [Phillips] ends up filing for bankruptcy the day after.” Tami Kilmarx, a nurse in Nashville who also resigned from the Tea Party Nation convention planning committee after falling out with Phillips, believes the convention may ultimately “completely disintegrate.” She says that Phillips has been urged to give away remaining tickets to Palin’s speech to head off the embarrassment of having the former vice presidential candidate speaking to a half-empty room.

Given all the negative publicity, Shreeve is surprised Palin hasn’t pulled out already. “In her contract she is allowed to send a representative if she can’t make it if she’s sick or something. Maybe she’ll come down with the flu,” he says with a laugh. He adds that Tea Partiers have written her letters pleading with her not to come because they believe that reports of a glitzy, high-priced dinner would hurt the real Tea Party movement, which prides itself on its thrifty, grassroots image. Meanwhile, Kilmarx reports that Nashville activists have contacted the Washington Speakers Bureau, which represents Palin, with concerns. And she says Tea Party activists in Tennessee have been trying to reach Palin through the media to let her know that Tea Party Nation does not represent the majority of Tea Party groups in the state. (Of the 42 Tennessee Tea Party groups, only one is officially supporting the convention.)

Robin Stublen, a Florida tea party leader who has been loudly denouncing Tea Party profiteers, believes that Palin “should not only pull out but pull out quickly.” He says the same about Blackburn and Rep. Michele Bachmann (R-Minn.), who is also scheduled to be a convention participant. Stublen says he thinks all of these politicians were “duped” into speaking at the for-profit event, adding that several hundred people have contacted him and urged him to call on Palin to stay away from the convention.

Phillips didn’t return a call for comment. But so far, Palin’s speech seems to be going ahead as planned.

And not all the critics are convinced that she should cancel. For all her qualms about the convention, Kilmarx isn’t rooting for Palin to back out. She says she trusts Palin’s judgment, and that too many unsuspecting people have paid large sums to attend. “I would not want to have any of the good people who have forked over good money to see her get hurt. It’s a sorry state of affairs,” she says. But Stublen isn’t so charitable. “It is up to us as individuals to be an informed public. Maybe this will teach people that anytime somebody uses the name ‘Tea Party’ to check them out before giving them money.”

Bill Hemrick might be inclined to agree. He is the Nashville businessman who loaned Phillips the initial $50,000 to pay Palin’s speaking fee, unaware that the event was designed to net Phillips a profit. “I wish I had known. I just thought the Tea Party movement was nonprofit. That’s my own stupid fault,” he tells Mother Jones. Hemrick has since gotten his money back, but like many of the event’s original enthusiasts, he has fallen out with its organizers, who have asked him not to attend Palin’s speech. Nonetheless, Hemrick thinks it would be tragic if Palin failed to show up. “If she pulled out it would do more detriment to the Tea Party movement than to any one person,” he says. “I sincerely hope that it’s a good deal for those people.”