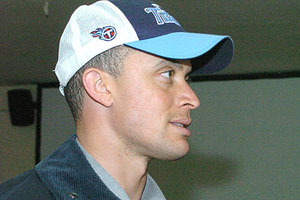 What did Harold Ford Jr. do at Merrill Lynch?

The former Democratic congressman has been working for the giant investment firm ever since losing his 2006 Senate bid in Tennessee. Recently, Ford took a 30-day leave of absence to explore another Senate run—this time for the New York seat currently held by Kirsten Gillibrand. But Ford won’t explain what he has done for the investment bank during his three years on Wall Street. In that time, Merrill Lynch nearly collapsed, was bailed out by US taxpayers, and went through a troubled merger with Bank of America.

Ford also won’t say whether he received one of the controversial bonuses that Merrill paid—allegedly with bailout money—in advance of the Bank of America merger, but the Memphis Flyer reported he “almost certainly” did.

Ford’s official job description—”vice chairman and senior policy adviser”—doesn’t reveal much. When Merrill Lynch hired him in February 2007, the company announced that he would “advise senior management on domestic policy issues, serve as a member of the firm’s public policy and social responsibility management committee, and support a variety of business development initiatives.”

But what does that actually mean?

With bankers and their bonuses all over the news, a sharp politician like Ford—who also has a gig as an MSNBC commentator and serves as chairman of the Democratic Leadership Council—would presumably be prepared to answer that question. Yet in an email exchange with Mother Jones, a Ford spokesperson would not provide any details about his boss’ day-to-day duties. The spokesperson would only note that Ford engages in “business development”—he didn’t refer to any work related to public policy or social responsibility. The Merrill Lynch media relations department did not answer repeated calls. A Bank of America spokeswoman promised to respond to an inquiry about Ford’s responsibilities at Merrill Lynch, but never did.

It’s not hard to guess why the investment firm hired the five-term congressman. “If a company hires a former politician oftentimes that will give them access to a great number of contacts that they wouldn’t have had otherwise,” says Dave Levinthal, a spokesman for the Center for Responsive Politics, a good-government group that monitors the revolving door between government and industry.

Ex-politicians who served on regulatory committees are especially prized in the corporate world. And Ford served on the House Financial Services Committee—the panel that regulates firms like Merrill and Bank of America. In fact, the two firms were Ford’s eighth- and ninth-largest industry donors over the course of his congressional career.

After joining Merrill, Ford “never lobbied” members of Congress on the firm’s behalf, he told the New York Times earlier this month. “My banking work has taken me out to Palo Alto,” Ford said. But the article didn’t give details about his duties. A Politico piece on Ford’s life in New York described him as filling “the sort of hazy role at Merrill traditionally occupied by political stars at New York investment firms.” Ford was there as a “rainmaker and image buffer, there to impress clients, make connections and put a politic foot forward in public settings.” Just who Ford was impressing and making connections with was unreported.

Even if Ford isn’t lobbying, the law allows him to “advise anyone else working for Merrill Lynch who to talk to, what key points to hit, and what members’ soft spots are,” says the Sunlight Foundation’s Lisa Rosenberg. “He knows better than anyone else what would be influential to members on the committee he used to serve. That’s not technically lobbying, but that makes him incredibly influential, and it makes him useful and valuable to Merrill Lynch,” she adds.

The last time Ford served in Congress, he was a Wall Street favorite. During the 2006 election cycle, he took in more money from securities and investment firms than any other member of the House of Representatives. During his entire congressional career, he collected more than $1.5 million from that sector. Only 15 people in the past 21 years have received more money from securities and investment firms—and most of them were presidential candidates, members of the Senate leadership, or longtime senators from New York (Wall Street’s home) or Connecticut (Wall Street’s country home).

If Ford is serious about a New York Senate run, he will have to address issues related to the financial crisis. And voters will deserve to know exactly what he’s been doing on Wall Street for the past three years.