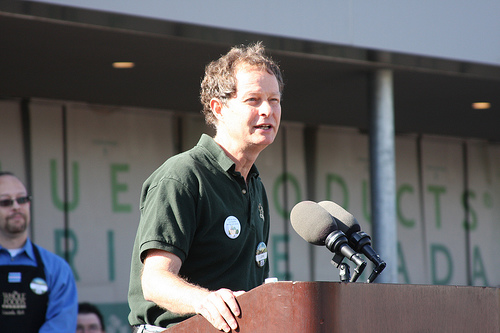 Whole Foods CEO John Mackey has probably brought more people to organic foods than anyone else in the United States. And many of the folks shopping at his markets undoubtedly consider themselves to be environmentally aware. They might even believe that by purchasing their groceries at Whole Foods outlets they are doing their part to help the planet. But certainly many of them would probably be startled to learn of of Mackey’s position on climate change: he’s a global warming denier.

In a recent New Yorker profile of Mackey, the Whole Foods chief argues that there is no scientific consensus regarding the causes of climate change. He lists Heaven and Earth: Global Warming–the Missing Science, a skeptical take on warming, as one of his recent favorite reads. He frets that the “hysteria about global warming” will cause the United States “to raise taxes and increase regulation, and in turn lower our standard of living and lead to an increase in poverty.” He adds: “Historically, prosperity tends to correlate to warmer temperatures.”

Mackey, of course, is wrong about the absence of a scientific consensus, and his theory that warmer temperatures produce prosperity is, to say the least, wacky. But his embrace of climate change denial is not truly a surprise, for Mackey is an unabashed libertarian, opposed to the very idea of “regulation” and “taxes,” no matter their purpose. He may be the vegan CEO of the country’s largest natural market chain, but he voted for Libertarian Party presidential candidate Bob Barr last year–because Ron Paul wasn’t on the ballot. There’s long been a debate over whether Mackey is a do-gooder or a simply a profiteer in disguise. (The whole sock-puppeting incident made him seem more of a bizarre egomaniac than anything else).

Though many of his shoppers are concerned about personal and planetary health, his latest revelation so far has gotten scant attention. But when Mackey penned an anti-health care reform op-ed in the Wall Street Journal last August, it spurred a swift call for boycott from progressives. “Whole Foods has built its brand with the dollars of deceived progressives,” proclaimed the the “Boycott Whole Foods” Facebook page, which had 33,829 members at last count. “Let them know your money will no longer go to support Whole Foods’ anti-union, anti-health insurance reform, right-wing activities.” A website promoting the boycott also sprang up. Mackey’s anti-labor positions have also triggered considerable ire, after he compared having a union to “having herpes.” But there’s yet no virtual call to eschew Whole Foods because of Mackey’s global warming position.

But that doesn’t mean there’s no potential problem here for Whole Foods. The company, which pulls in $4 billion a year, does try to promote itself as a firm that cares about the environment. Its official blog touts climate-related causes like rainforest preservation, waste reduction, and the awareness about carbon footprint of food. During my last visit to the store, I was urged to sign up to receive my shopping receipts via email, to save paper. But their focus is on what customers can do to reduce their impact—including in one post an admonition to “vote with your dollars” by shopping at local and at socially-conscious businesses.

The company ranked among the biggest purchasers of green power last year, but neither the company nor its CEO has advocated for environmental policies in line with the views held by their customer base. Meanwhile, companies widely scorned by progressives have stepped up efforts to deal with climate change by both implementing sustainable practices and advocating for sound policy. Chief among them is Walmart, which recently joined with a number of other retailers, universities, suppliers, and the EPA to form the Sustainability Consortium. Its goal is to create an industry-wide sustainability index for the lifecycle of products. And a number of consumer-oriented businesses, such as Nike, Gap, and Starbucks, are working through Business for Innovative Climate and Energy Policy to pass climate change legislation. Whole Foods, despite its image, is not part of that coalition. And with Mackey its most visible officer, Whole Foods essentially can be counted as part of the corporate opposition to the pending legislation.

Mackey did step down as chairman of Whole Foods’ board last week, but he remains both the CEO and a board member. He says that the move was more ceremonial. There’s yet no indication whether this shift will lead to any changes in the company’s climate-related policies.

Last year, Mackey penned a book touting the “power of conscious capitalism.” He may not want his customers who care about global warming to use that power when they are deciding where to buy their organic arugula.