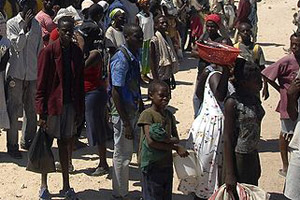 The U.S. prison complex at Guantanamo Bay, Cuba, is inextricably linked to terrorism and torture in the minds of most Americans today. But not very long ago, it was known for torment of a different kind. In the 1990s, an immigrant detention center at Guantanamo served as a holding pen for undocumented migrants from the Caribbean who were caught trying to enter the United States. Most notoriously, it was a destination for Haitian “boat people,” including some with HIV, who fled their country in large numbers in the wake of the 1991 coup.

Now, in the aftermath of the Haitian earthquake, there are signs that Guantanamo may be returned to this chapter in its ignominious history. While the Obama administration suspended deportations to Haiti and granted temporary protected status to undocumented Haitians currently living in the United States, this policy offers no protection to quake victims who try to reach U.S. shores. If large numbers of desperate Haitians begin to attempt the treacherous trip, they could well end up in Guantanamo’s Migrant Operations Center (MOC), operated by the Department of Homeland Security.

Last Friday, Fox News was already reporting that Guantanamo was one of the “options on the table” for dealing with fleeing Haitians.

“Guantanamo is going to be an enormously valuable asset as we go through this,” State Department Spokesman P.J. Crowley told reporters on Thursday, speaking generally about U.S. efforts to help Haiti. “[Guantanamo] is in the vicinity. … So we’re identifying all of the assets in the region that we can use in order to stage operations.”

One official acknowledged that the center likely would become the most viable option “if there was a mass migration” of Haitians from their country….

Once at the Guantanamo facility, the refugees would be supervised by the Bureau of Immigration and Customs Enforcement, which oversees the facility and has contracted the Florida-based Geo Group firm to manage day-to-day operations….

“We haven’t been asked to do anything,” one official said. “No one’s given us any marching orders. … But if they come to us, we’re ready to go.”

On Monday, Tom Barry of the Americas Program at the Center for International Policy reported on the MOC—which, like an increasing number of U.S. prisons, is run by a private, for-profit company.

Today, under a contract with DHS it is operated by Geo Group, a private prison corporation that relies on federal government detention/prison contracts for about 40% of its revenues.

In 2003, with the creation of the Department of Homeland Security, MOC was upgraded and its operation transferred from the department’s own Immigration and Customs Enforcement to GEO Group, the country’s second largest private prison firm. In part because of the special international standing of the Guantanamo Bay military base, which one official called “the legal equivalent to outer space,” the State Department is cosponsor of the MOC contract.

According to GEO, it manages and operates a detention center with 130 beds but which “can house up to 500 detainees in the event of a surge.” According to the contract, “This dynamic population may consist of single adult males and females, unaccompanied male and female juveniles, and family groups of various nationalities and security levels.” Under the terms of the contract, which was renewed for a five-year period in November 2006, “GEO is responsible for providing all staff, supplies, and equipment to manage and operate the center.”

The 2003 contract was arranged, according to GEO, “at the emergency request of ICE in 2003″ and offered the company “a unique opportunity.” Since responding positively to that emergency request, GEO says that it has “been successfully working with ICE in this unique environment and has developed professional working relationships with all of the federal agencies involved in the operation of the MOC.”

GEO is the company that also runs the largest privately run detention center–and also probably its worst–in Pecos, Texas. As Tom Barry reported last year, the Reeves County Detention Complex has been the site of two recent riots, several suicides, and numerous deaths from inadequate health care. Is this what awaits refugees from the Haitian earthquake?

Back in the 1990s, there was an outcry against the conditions for Haitian refugees at Guantanamo, especially a group of about 150 who had HIV. It was during this period that Bill Clinton set the stage for George W. Bush’s Guantanamo by asserting that anyone held there did not have any legal rights. As Brandt Goldstein pointed out in Slate in 2005:

We sometimes forget that during the Clinton presidency, the United States ran an extralegal detention camp on Guantanamo—and went to federal court to defend its right to do so. The camp during the Clinton years was by no means the nightmarish operation it is now; certainly, there weren’t allegations of torture. But Guantanamo under Clinton produced its own share of suffering and abuses—and perhaps most important for today, the court decision that shut it down was eventually wiped off the books, thanks to legal maneuvers by the Clinton Justice Department.

Some of the refugees who fled Haiti back in the early 1990s were eventually treated as asylum-seekers and admitted to the United States. But in 1994, with Haiti supposedly stabilized, the Clinton administration began shipping them home. And according to a 2005 report cited by Fox News, the George W. Bush administration maintained that admitting Haitian refugees might “encourage other Haitians to embark on the risky sea travel and potentially trigger a mass asylum from Haiti to the United States.”

So unless the current administration reverses policy once again, any Haitians who might be taken to Guantanamo could be there for a while. This surely was not what Obama had in mind when he made his campaign promise to close the notorious prison camp.