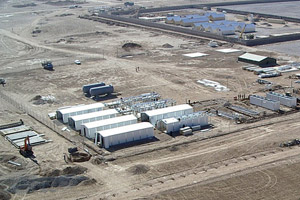 Once is an anomaly; twice is the beginning of a pattern. Right now, we’re seeing the same sequence of events for the second time in less than a decade, and it looks like the signature American way of war in our time is coming into focus.

In 2003, when the Bush administration invaded Iraq, the Pentagon already had on its drawing boards plans for building a series of permanent mega-bases in that country. (They were charmingly called “enduring camps.”)  Once Baghdad fell and it turned out that, Saddam Hussein or no, the U.S. was going to have to fight rather than settle in and let the good times roll, hundreds of micro-bases were added to the mega ones—106 of them by 2005, more than 300 in all. Then, in 2005, Washington decided to trade in its embassy in one of Saddam’s old palaces for something a little spiffier. In its place, on a 104-acre plot by the Tigris River in the middle of Baghdad, for at least three-quarters of a billion dollars after cost overruns, it built the largest, most expensive embassy on the planet. It was planned for a staff of 1,000 “diplomats” with all the accoutrements of the good life and plenty of hired help. (Even now, despite much discussion about “ending” the American role in Iraq, further plans are reportedly being made for the embassy’s staff to double.) This was clearly to be U.S. mission control for the Greater Middle East.

Building of this expansive kind is, of course, a staggering imperial undertaking. It implies a global power with resources beyond measure, for which waste means nothing. The mega-bases and the embassy were, in that sense, American wonders of the world, our own ziggurat-equivalents in Mesopotamia, right down to the multiple PXs, familiar fast food outlets, and miniature golf. No empire had ever launched a base-building program quite like it (if, that is, you leave out the precursor to this whole experience, the U.S. in Vietnam in the 1960s).

The Iraqi base-building project alone had already absorbed several billion taxpayer dollars in just the first half-year of construction in 2003. But it did look like a one-of-a-kind architectural adventure— until, that is, the “forgotten war,” the one in Afghanistan, came back into view. Starting in 2008, base building ramped up there, went into overdrive in 2009, and hasn’t come out of it yet. The result: an even more staggering base-construction splurge, and with it, the announcement last year that another monster embassy would go up, this time in Pakistan’s capital, Islamabad, for another cool near-billion. (The already large U.S. embassy in the Afghan capital, Kabul, would also be further expanded to the tune of $175-200 million). And keep in mind that none of this even includes the huge ring of supporting bases for America’s Afghan and Iraq operations in the Persian Gulf, South and Central Asia, and even on the island of Diego Garcia in the Indian Ocean.

Does anyone see a pattern here?  The American military must be the heaviest occupation force in history. According to reports, it now has 1.5 million pieces of equipment, micro to mega, to get out of Iraq as U.S. forces draw down. This is war and occupation of Guinness World Records proportions, a veritable Ripley’s Believe It Or Not of imperial military construction. The only thing that won’t make the record books, of course, is the results: in war-fighting terms, in both Afghanistan and Iraq, the world’s mightiest military has been battled to at least a draw by rag-tag, lightly armed, minority insurgencies.