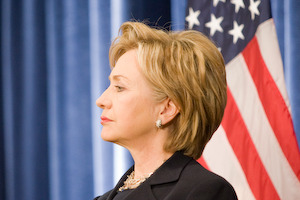 Ever since Barack Obama started running for the White House, he’s been plagued by lawsuits from detractors who claim that he is not a natural-born citizen, and thus is ineligible to serve as president. Now the devoted conspiracy theorists of the so-called “eligibility movement” have a fresh target: Secretary of State Hillary Clinton. And there’s a chance that the Supreme Court might hear their challenge.

In January 2009, a longtime foreign service officer named David C. Rodearmel sued Hillary Clinton in federal court in DC arguing that an obscure provision of the Constitution blocks her from serving in Obama’s Cabinet because of her previous stint in the US Senate. This argument isn’t as nutty as those used in the numerous lawsuits disputing Obama’s citizenship—in fact, it previously prevented Orrin Hatch from becoming a Supreme Court justice.

Rodearmel is relying on what’s known as the Emoluments Clause, which bars members of Congress from taking a federal civil job if Congress raised the salary for that job while they were still in office. The secretary of state’s salary went up in 2008, while Clinton was still in the Senate. The provision, which was designed to combat corruption, has long been a headache for presidents seeking to tap members of Congress for their Cabinets. They’ve typically solved the problem by resorting to what’s known as the “Saxbe fix”—a move named after William Saxbe, a Republican Ohio senator Richard Nixon installed as attorney general during the Watergate scandal.

The fix is simple. All Congress has to do is repeal any pay raises for a given position so that the salary is the same as it was before the nominee’s last term of elected office. Most modern presidents have adopted this solution, and after Obama nominated Clinton for secretary of state, Congress duly repealed the pay raises for the position that had gone into effect while she was serving in the Senate. Yet the fix has always been somewhat controversial. In 1987, President Ronald Reagan decided that the Emoluments Clause barred him from nominating Utah Senator Orrin Hatch to a Supreme Court seat, and he nominated Anthony Kennedy instead. Now, Rodearmel thinks the clause should be enforced against Clinton—as well as all the other former senators in the Obama administration.

Rodearmel himself says he’s just doing his best to protect the Constitution, although he’s no stranger to conservative political causes: In 2004, he donated $250 to Swift Boat Veterans for Truth. And he’s supported by some familiar Clinton antagonists, namely the conservative legal group Judicial Watch, which filed numerous suits against both Hillary and Bill Clinton when they occupied the White House. His quest has also been cheered on by WorldNetDaily, the leading online promoter of the birthers’ cause, who seem eager to open up a new front in the “eligibility” fight.

Rodearmel’s case could become an irritation for the Obama administration. The US district court in DC tossed his complaint out last fall on the grounds that Rodearmel lacked standing—meaning he couldn’t actually demonstrate that he’d suffered any injury from working for a supposedly ineligible boss. (This fatal flaw has also prevented any of the birther lawsuits from going forward.) The court didn’t buy Rodearmel’s arguments that working for Clinton would violate his oath to “bear true faith and allegiance” to the Constitution. But thanks to a quirk in federal law, such eligibility cases can now be appealed directly to the Supreme Court. So Rodearmel recently asked the high court to consider his case.

Many legal experts out there think the Emoluments Clause is a non-issue. Chief among them is Obama’s former constitutional law professor from Harvard, Laurence Tribe, who has pointed out that the clause implies that a member of Congress is only ineligible for a civil job if they personally voted for a pay raise for that position. In Clinton’s case, the raise for the secretary of state was essentially a routine cost of living adjustment, mandated by a law passed in 1990 rather than a vote that Clinton participated in. But in swinging for the high fences, it’s clear that Rodearmel is seeking to persuade one justice in particular—and it’s not who you might think.

As it turns out, one of the most prominent critics of the Saxbe fix during the Watergate scandal was none other than liberal Justice Stephen Breyer, who was, of course, appointed to the bench by Bill Clinton. As a law professor, Breyer wrote a letter to Sen. Robert Byrd concluding that the “fix” Nixon was proposing in order to install Saxbe was unconstitutional. (Defending the idea, oddly enough, was Robert Bork.) Rodearmel is clearly hoping that Breyer might be intrigued enough to want to revisit the issue after all these years. And standing behind him are a host of conservative activists, hoping that this legal long-shot might just work when all the others have failed.