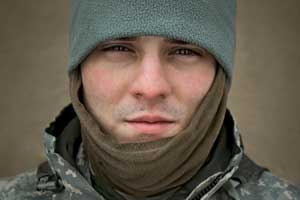 IN THE FALL of 1964, not long after Barry Goldwater had clinched the Republican nomination for president, historian Richard Hofstadter penned an essay for Harper’s called “The Paranoid Style in American Politics.” It was an instant classic—not because it was so elegantly written, but because in just a few pages it described with deadly accuracy one of the major strains of our national dialogue.

“The paranoid spokesman,” Hofstadter wrote, “is always manning the barricades of civilization…Like religious millennialists he expresses the anxiety of those who are living through the last days and he is sometimes disposed to set a date for the apocalypse…He does not see social conflict as something to be mediated and compromised…Since what is at stake is always a conflict between absolute good and absolute evil, what is necessary is not compromise but the will to fight things out to a finish.”

Oath Keepers, the group featured in our cover story, would seem the classic case in point. Its members are cops, sheriffs, and military men and women determined to resist the tyrannical orders they believe are imminent from the Obama administration. The fantasies they spin—a “globalist” leadership intent on declaring martial law, putting God-fearing Americans in detention camps, and asking UN blue helmets to keep order while it imposes health care reform and who knows what else—replicate almost exactly the fears far-right cranks have peddled for generations. Replace “socialism” with “communism” and you are pretty much back to 1964 (or 1934 or 1884, for that matter).

But what was true then is true now: Dismissing one’s adversaries as wing nuts is myopic, both intellectually and politically. Like it or not, the Oath Keepers, and the myriad other “patriot” groups now emerging around the edges of the Tea Party movement, are tapping into a real strain of popular anger. And who wouldn’t be angry? Unemployment for millions, bailouts and bonuses for a few. A health care reform plan supremely undersold by a Democratic establishment unconcerned with the battle for hearts and minds (see: Martha Coakley). A GOP controlled by pro-corporate nihilists.

But righteous anger is one thing. Manufacturing fear, dare we say terror, is another—and over the past year, we have seen cynical politicians and talk-show demagogues increasingly willing to traffic in it. It’s no longer just handfuls of militia types trading overheated conspiracy theories; it’s America’s most popular cable news network giving gobs of airtime to people who all but advocate armed insurrection. It’s the man who is now our newest senator chortling, on live TV, that maybe Barack Obama was born out of wedlock—don’t you wish guys still had to face an affaire d’honneur for comments like that?—a scurrilous point we take note of only because it indicates that Scott Brown gets his talking points from extreme-right sites like WorldNetDaily (WND).

When people in positions of great power play footsie with those who advocate treason—or claim that the elected commander in chief is a bastard foreigner with no claim to the office—they are not just engaging in a lively debate. They are actively negating a fundamental principle of American politics: that the government, no matter how much you might disagree with its representatives, is of, by, and for the people.

Indeed, to a growing number of celebrity conservatives, this administration is no longer simply an adversary with whom you cross swords—it is an enemy you must destroy. In a paranoid culture, as Hofstadter recognized, the enemy is “thought of as being totally evil and totally unappeasable [and] must be totally eliminated.” A government as villainous as the one portrayed on sites like WND cannot be debated or negotiated with, or even accorded the most basic respect. It must be vanquished.

If this were all just so much blowhardery—designed merely to drive ratings and bait liberal bloggers—it would be slightly tawdry but perfectly ordinary political theater for the groundlings. But what may have started as tactical rhetoric has become a philosophy of governing. As MoJo blogger Kevin Drum has put it, the congressional minority’s guiding principle is now “What part of NO! don’t you understand?”

This is the true danger of condoning rhetoric like Oath Keepers’: It’s not just that it might push some from the paranoid fringe to the terrorist fringe. It’s that the political debate becomes corroded to the point where we as a nation no longer have enough common ground to agree to disagree. When one side’s goal is to stonewall and destroy rather than discuss and engage, we get paralysis—it takes two to tango, but only one to stonewall. (And stonewall-and-destroy is by no means a strategy unique to Republicans—yes, kill-the-health-care-bill lefties, that means you.) There are many ways to attack democracy, and one of them is to slowly, cynically undermine the founders’ mandate: to work together toward a more perfect union.