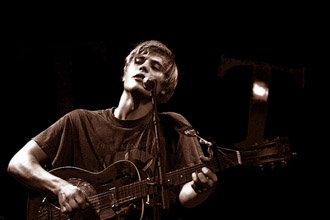 Johnny Flynn and the Sussex Wit will never again end up in the MoJo Dog Pile.

That’s what I call the cache of unsolicited media that for one reason or another never caught the attention of our reviewers. It’s also where I discovered Flynn’s debut CD, A Larum, and by the time I managed to listen to it and get myself hooked—I mean, I pretty much played it to death—it felt too late for a review. So last Thanksgiving I included A Larum in our (partial) staff list of Music We’re Thankful For, and moved on.

That very month, as if to extend my addiction, singer-guitarist Flynn released Sweet William, a stand-alone EP recorded at his home in London—he emigrated to the UK from South Africa at an early age. It’s a sweet little four-song effort complete with more lush instrumentation from the Sussex Wit (horns, cello, piano, percussion), complementing Flynn’s Appalachian-tinged flat picking and adding depth to his timeless sound. (Flynn is also handy with a fiddle and a banjo.) The EP is also a friggin’ tease for the group’s second full-length, due out this spring. That record will be produced by Ryan Hadlock, who worked on A Larum and has assisted the likes of Blonde Redhead, the Strokes, and former Pavement frontman Stephen Malkmus. (Permanent reunion, please?)

“The Mountain is Burning” begins with a sort of Senegalese (!) rhythm that morphs into a romping chorus that evokes, well, cowboys—musically, at least. “Trains” and the title track, “Sweet William” are a bit more vintage Flynn (if a 25-year-old’s first album can be called vintage), highlighting his picking skills and melodious singing. “Drum” is a dirge that begins with piano and bass drum; here you’ll sense a Tom Waits-y carnival vibe and Flynn’s tantalizing words (as I deciphered them): I’m a hag and I’m hooked / I’m a down and I’m in / I’m a well without water / I’m fat and I’m thin / I’m the story you told / I’m the promise that you sound / I’m the day without water / I’m the world that I won / Life fast, die young / Leave a good looking corpse, good looking corpse. You can listen to it below.

I’m neither a fanboy nor a die-hard folkie, tending to prefer the old-time mountain tradition to acoustic singer-songwriters who have become oh so dime-a-dozen. But from the first time I laid ears on him, I knew Johnny Flynn was something special. I was surprised to learn he’s only a quarter-century old, because his music and dreamy poetry evoke experience well beyond his years. Lost in the richness of the melodies, one almost envisions an ancient soul drifting through crooked back alleys lit by torch and paved in cobblestone, struggling with modern contradictions and religious strictures: Listening hard I felt too young, Flynn sings on A Larum’s “All the Dogs Are Lying Down,” and, in “Brown Trout Blues,” I could be somewhere else / I should be someone else but / You wouldn’t know me if I was.

Flynn cultivates these themes. To be sure, he fancies himself a bit of a troubador—but he wears the cap without self-consciousness. (He’s done some acting, too, I gather.) As such, it’s hard to discern where his own experiences end and the storytelling begins. And with apologies to wordsmith John Darnielle, Flynn’s lyrics are both sufficiently evocative and sufficiently cryptic that they imprint something unique on each listener, and likely something different than the artist had in mind.

In my view, this trait—something I also love about the Pixies (and Pavement)—elevates a song into art. And I’d rather not get too much into any artist’s head for fear of tainting my own listening experience. That’s the problem with so many videos—it’s like seeing a movie before you read the book. I’d rather just watch an artist perform, as below. (You might also like Flynn’s endearing duet with Laura Marling covering “Travel Light,” by Jeffrey Lewis and Diane Cluck.)

You can hear all four songs from Sweet William on MySpace, where you’ll also find home-recorded demos of newer songs—Flynn has promised to post them monthly. You won’t find the EP in American record stores, but you can download tracks from iTunes or get a hard copy through Flynn’s website. And, if you’re lucky enough to be in Austin, Texas, this coming March, Flynn is booked for a series of shows at South by Southwest.