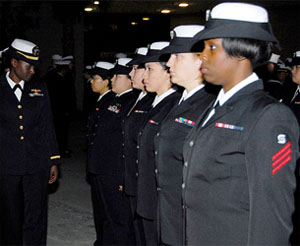 Anyone with an interest in gender equality or fair treatment of gays and lesbians, take note: The Navy announced this week that it will start assigning women to its submarine crews next month. (That is, unless congressional opponents decide to intervene.)

To the uninitiated, that might not sound like a big deal. But it’s a true sea change. In fact, it could foretell a faster end to the military’s “Don’t Ask, Don’t Tell” policy—and even its arcane injunction on women serving in combat roles.

The United States military has always been preoccupied with its hidebound traditions. In that respect, the Navy is like other military branches, only more so, with 21st-century sailors speaking of the Joneses—Davy and John Paul—like immediate family. Within that culture, there’s always been an even more heritage-obsessed fraternity: the submarine service. It was officially born in 1900 with its first undersea ship of war, the USS Holland. It was also the first branch to truly go nuclear, with the atomic-powered USS Nautilus in 1955. In all those years, the “silent service” has reveled in its exclusivity, operating as a fraternity for some of the Navy’s smartest and ablest sailors.

Except that it’s a fraternity no more.

If that were the whole story, what a happy story it would be. But opponents of the move have a possible trump card to play.

In accordance with federal law, Defense Secretary Robert Gates informed Congress of the change on Monday; members of the House and Senate now have a month to block the move by passing a bill, or demanding a study of the issue (an option that’s slowed progress on DADT). Similar action has been taken before, as when the GOP-led House Armed Services Committee in 2005 approved a resolution barring women from serving in any unit that might see combat action.

Duncan Hunter (R-Calif.), the architect of that proposal, said at the time: “The American people have never wanted to have women in combat and this reaffirms that policy.” There’s no word yet on whether he feels the same way now, five years later, or whether ex-Navy tailhooker John McCain—who thinks women can be effective vice presidents, but not fighter pilots—has a dog in this fight. But if congressional conservatives allow this submarine rule to stand, it could signal a general unwillingness on their part to legislate social policy in the military. Perhaps their resistance to gays and women in combat, too, will collapse under “bill fatigue.”