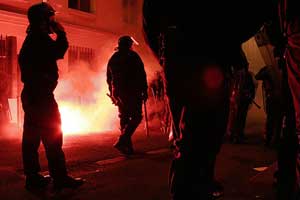 Does Obama want to impose martial law to shut down the Tea Party movement?

For months, much of the right-wing blogosphere has been fuming about Executive Order 12425, which Obama amended in mid-December. The one-paragraph document grants Interpol, the international law enforcement agency based in France, special privileges within the United States—mainly immunity from the Freedom of Information Act and from lawsuits over activity considered part of its official duties. It’s no secret police conspiracy.

But thanks to Glenn Beck, the National Review, Newt Gingrich, and others, this obscure directive has fueled a firestorm of right-wing paranoia. Conservative activists warn that Obama intends to use Interpol as a “secret police” with the power to knock down doors and arrest law-abiding American citizens. No matter that Interpol agents don’t even carry guns and have no right to arrest people, or that its American office boasts all of five people. And the hysteria over the executive order is not confined to the Tea Party movement. It has also reached the highest levels of politics—that is, the US Congress.

In January, Rep. Mike Rogers (R-Mich.) introduced a resolution that would require a repeal of the order. “As a former FBI agent, I believe that giving INTERPOL blanket exemptions is dangerous,” Rogers explained in a statement. “This change ties the hands of American law enforcement and prevents full access to information that could be crucial for on-going U.S. investigations related to criminal or national security activity. This is no time to be weakening the ability of law enforcement to defend our nation.”

The online backlash to executive order 12425 became so intense that Ron Noble, Interpol’s secretary-general, wrote a piece for Newsweek’s website debunking the conspiracy theory. “An executive order cannot legally authorize an unconstitutional act, and this one doesn’t even come close,” he wrote.

But Noble’s appeal for reason isn’t likely to quiet the storm. That’s because the Obama executive order feeds a thriving narrative on the right about the current administration’s nefarious intentions. Ever since Obama took office, certain corners of the Internet have been frothing with speculation that Obama fancies himself a Mobutu-style African dictator who is furtively plotting to use martial law to crush dissent or unrest over his economic policies.

Nutty as this premise sounds, it’s proven particularly popular among those who believe that Obama is not an American citizen or who are bitterly opposed to health care reform. The drumbeat has been so loud that a host of state legislators have introduced “state sovereignty” bills declaring their independence from the federal government under the 10th Amendment and threatening to secede in the event that martial law is declared; Sarah Palin even signed one such bill before quitting as governor of Alaska. (A favorite of states’ rights proponents, the one-sentence 10th Amendment basically says that any power that isn’t specifically granted to the federal government by the Constitution is reserved for the states.)

Other “evidence” that Obama has despotic designs: A Rand Corporation report released in April 2009, titled “A Stability Police Force for the United States.” The think-tank study, commissioned by the US Army, weighs the possibility of creating a new national civilian police force that could be used to help stabilize foreign countries in conflict or after disasters such as the earthquake in Haiti. But because such a force would be insufficiently busy abroad, the authors also suggested that it might be used at home—for instance, to help respond to natural disasters.

The study has become Exhibit A for those who think Obama wants a domestic secret police to silence his political enemies, particularly those in the Tea Party movement. The conservative blogger YidwithLid wrote of the “brown shirt” report, “I wonder what kind of Domestic Role the Stability Police can have, controlling Tea Parties? ‘Fixing’ Fox News? A national police under the control of this or any president will do nothing less than signal the end of freedom in the United States. Any movement toward this force must be voted down.” Of course, it didn’t help that the Department of Homeland Security produced a 2009 report warning about the rising threat of right-wing extremism—convincing many conservative activists that they are being targeted by the federal government.

When I asked Rand spokesman Warren Robak about the study, he said jokingly, “Oh, you mean the Gestapo report?” The wonks at Rand were startled when their staid policy analysis became a rallying cry for anti-Obama and right-wing activists. Robak points out that the report was actually commissioned in 2007, during the Bush administration. He also explains that the military had been questioning its ability to shoulder nation-building responsibilities and thought it might be a job better performed by civilians. (After the post-invasion debacle in Iraq, it’s not hard to see why police trained in dealing with civilians might be a good idea.)

None of this is likely to quiet Obama’s critics—especially as many already believe that he is plotting to hold citizens in “FEMA-run concentration camps.” Activists believe these were established under the Bush administration to hold US citizens should martial law be declared following an emergency like Hurricane Katrina. Their suspicions swelled when Rep. Alcee Hastings (D-Fla.) introduced a bill in January 2009 called the National Emergency Centers Establishment Act that would direct the secretary of homeland security to establish national emergency centers on military installations to be used in the event of such disasters.

By “disasters,” Hastings was presumably referring to events such as the hurricanes that regularly buffet his home state. But conservative activists believe the bill would empower the president to detain pretty much anyone he wants at the centers. And when Obama designated the H1N1 flu outbreak a national emergency last fall, right-wingers seized on this as further evidence of a sinister government plot. Conservative bloggers warned darkly that anyone who refused to submit to the flu vaccine might be held in one of the government-run emergency facilities.

Leonard Zeskind, author of Blood and Politics, a history of the white nationalist movement, says that the Tea Partiers’ conspiracy theories aren’t new. Similarly hysterical warnings of government overreach were rife during the Clinton or Carter administrations. “In the militia days in the 1990s it was about a UN invasion. It’s exactly the same phenomenon. Some of the same people are involved,” he says.

But these extreme conspiracy theories aren’t just confined to the radical fringe. They’re being adopted by national politicians, as Rep. Rogers proved with his attempt to roll back Obama’s Interpol order. Back in the 1990s, says Brian Levin, the director of the Center for the Study of Hate and Extremism at California State University San Bernardino, “The black helicopter stuff was pretty well segregated from the mainstream world. But now you have Sarah Palin entertaining the Obama [born in] Kenya thing or [Gov.] Rick Perry from Texas toying with the secession idea.” It’s yet another sign of how much the Tea Party and the Republican Party are increasingly one and the same.