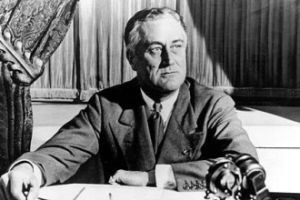 Not long after Scott Brown, a nude model turned U.S. Senator, and his Tea Party cohort rode the public’s growing disquiet and the candidate’s everyman truck into office, you could hear the shift in Barack Obama’s voice. Out went the cool, detached president, and in came a new populism and a leader who had lost his elitist “g”s and now talked about “leakin’” roofs and “buyin’” new curtains, who spent time walkin’ the shop floor and rollin’ up his shirtsleeves. In Elyria, Ohio, he exhorted a town-hall crowd with how hard he’s been fightin’—so hard, in fact, that he repeated the word 14 emphatic times.

Rhetorical fisticuffs aside, Obama the Populist had by now essentially sidelined health care and climate change for a far narrower focus in 2010: jobs. In his State of the Union Address, he held up the nearly $800 billion stimulus bill as evidence of his job-creating bona fides, and laid out a new $30 billion small-business initiative using repaid bailout cash to boost hiring and wages. “Jobs must be our number-one focus in 2010” was his mantra.

The president’s recent jobs “surge,” however, does little more than tilt feebly at fixin’ the country’s dismal employment landscape. Sendin’ funds to community banks to provide credit and cuttin’ taxes for businesses, as Obama proposes, are at best indirect and modest routes to creatin’ new jobs or savin’ existing ones. No indirect program of this sort is going to quickly lower an official unemployment rate hovering near 10%, with underemployment at 17%, and record numbers of people jobless for 27 weeks or more.

Looking back on Obama’s first year, there’s little to suggest he’s up to the jobs task. The stimulus, for instance, reportedly paid for around 600,000 jobs in the fourth quarter of 2009, and around 1.2 million jobs since its creation—nothing to scoff at, but scant enough improvement in the face of 2.6 million jobs lost in 2008 and nearly 4 million in 2009. Compared to presidential forebear Franklin Delano Roosevelt, who galvanized the nation during the Great Depression with truly popular direct public-works programs that created millions of jobs, Obama’s record is paltry indeed.

To read a post by Steve Fraser about “The New Deal in Reverse,” click here. To catch him in an audio interview discussing why Obama has ignored the jobs model Roosevelt pioneered, click here.