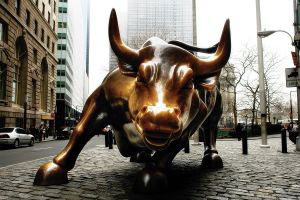 If you thought the mortgage-backed securities and other complex financial instruments that crashed the economy were risky, you’ll love Wall Street’s latest brainwave: a new financial market in which players can gamble on whether upcoming Hollywood movies will be blockbusters or bombs.

For years, Cantor Fitzgerald, a Wall Street investment firm, has been operating the “Hollywood Stock Exchange,” a fake-money game in which players trade “stocks” to bet on how films will do at the box office. Now Cantor could soon get government permission to make a real-money version of the game—a market in which players can gamble on the success or failure of, say, Pirates of the Caribbean 4. Critics are worried that this new market could be vulnerable to insider trading and create bizarre incentives for moviemakers—and that it will also enlarge the risky family of financial products that helped trigger the economic crisis.

“This is such a bad idea on so many levels,” says Lynn Stout, a law professor at UCLA and an expert in derivatives, the category of financial instruments that includes Cantor’s proposed box office futures. “What they want to do is basically open up a casino for people who want to make money for predicting the next blockbuster.”

Here’s how it would work. Hollywood studios, actors, directors, investment banks, hedge funds, and anyone else would be able to buy and sell contracts based on the value of all ticket sales in the first four weeks of a movie’s release. According to Cantor Fitzgerald’s plans, the contracts would each be worth one-millionth of a given movie’s gross sales during that four-week period. Let’s say that you thought Avatar would pull in $500 million during its first four weeks. So, you buy 100 futures contracts at $490, figuring that when Avatar made $500 million you’d be up $1,000. Unfortunately, as it turned out, Avatar “only” made some $430 million domestically in the first month after its release—meaning that you’d lose a cool six grand.

One problem, skeptics say, is that Hollywood insiders could have a huge advantage in such a market. People in the movie business often have far greater access to crucial information about a film’s box office prospects than ordinary investors do—such as how big the marketing budget will be or how bad the performances are. “If the industry is selling, odds are that it is a bad idea to buy,” says Dean Baker, the codirector of the Center for Economic and Policy Research.

Another problem, says Stout, the law professor, is that such a market creates “all sorts of perverse incentives to manipulate the success of movies.” Let’s say you were responsible for Gigli, and you realized during filming that it was shaping up to be one of the worst movies ever made. Instead of writing off the $54 million you’d shelled out to make the film, you could simply buy up a stack of futures contracts priced on the assumption that the movie would tank. Then, to nudge that failure along, you could slash the marketing budget, or decide to add 30 more dreadful minutes to the final cut. Played correctly, a studio could inflict a movie like Gigli on the world and still turn a profit. If box office futures trading happens, being a Hollywood insider would take on a whole new meaning.

Proponents of the concept argue that the plan would simply allow moviemakers to offset their risks. Media Derivatives, Inc., another company that has applied for government approval for a box office futures market, said in a submission to regulators that it wants to enable “risk transfer…from the producers, studios, theaters, and financiers/film funds to a community of speculators willing to assume these risks in return for being paid risk premiums.”

Stout says there could be a legitimate case for a futures market limited to players with an economic stake in a movie’s success. But Cantor has no plans to restrict trading to those with skin in the game. If it gets the green light from the government, the firm plans to hold “boot camps” across the country to familiarize people with box office futures trading. And it’s already recruiting players of its Hollywood Stock Exchange game to set up accounts to “practice” for the rollout of the real market. One New York investment firm, SAGA Capital, has said it will launch a hedge fund focusing on box office futures if Cantor’s plan gets the go-ahead.

In other words, Cantor hopes to flood its futures market with plenty of players whose participation would be purely speculative. “In layman’s terms, we call that making a bet,” Stout says. If that sounds familiar, it should. One of the catalysts for the financial crisis was the spread of risky derivatives like credit default swaps, which allowed investors to bet on whether subprime mortgages would default. Because those investors had no stake in the underlying product—in this case, the original mortgage—they took far greater risks. In that context, Cantor’s plan could be “incredibly dangerous,” Stout says. “Until we fix this legal problem that you can make purely speculative derivative bets, we have to worry that any newly created form of derivative can add risk to the system.”

The Commodity Futures Trading Commission (CFTC) is responsible for approving Cantor’s proposal, but refused to comment on the application. A Cantor spokeswoman refused to discuss the firm’s plans, saying only that the idea was pending approval. But if the plan succeeds, the amount of money in play could be significant. The movie business brought in around $10.6 billion in domestic box office revenues last year. Because anyone could participate in the Cantor Exchange—not just people who own rights to the box office takings—a futures market could be much bigger.

Tyson Slocum, a futures expert with Public Citizen who advises the CFTC, says Cantor’s plan suggests Wall Street hasn’t learned its lesson from the crash. Investment firms shoudn’t be able to launch new “casinos,” he says. The movie business is already an industry based on smoke and mirrors. If Cantor has its way, the fortunes of other financial players could be tied to Hollywood’s whims. And there’s no guarantee of a happy ending.