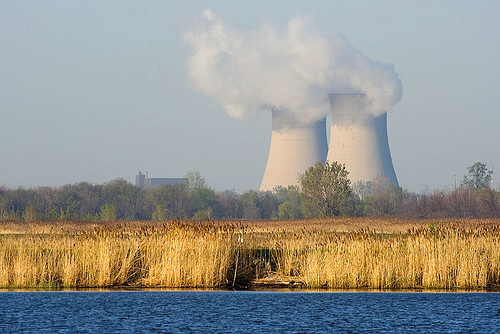 Barack Obama on Tuesday told reporters that his recent embrace of nuclear power is part of an effort to adopt some Republican ideas on energy, noting that he remains an “eternal optimist” about bipartisanship. But Obama’s attempt to woo Republicans with nuclear power has met predictably bad reviews from the Party of No, which maintains that this is “an anti-nuclear administration.” (Sarah Palin seems to like it, however.)

Pouring another $36 billion into government-backed loans “avoids the bold, no-cost solutions that would truly jumpstart nuclear power in the U.S.” writes the GOP on its website. (The Republicans also describe nuclear as an “emission-free” energy source, though it’s not quite clear why they care about emissions since most Republicans don’t seem to think greenhouse gases are a problem.) The GOP plan also touts its “no-cost nuclear power initiative” to bring 100 new nuclear reactors online over the next 20 years, which was included in the energy bill the party released last summer. They don’t manage to explain how it will be “no-cost,” since the nuclear industry has made it very clear that it can’t exist without government support. (See “The Nuclear Option” for more.)

“Without loan guarantees we will not build nuclear power plants,” Michael J. Wallace, co-chief executive of UniStar Nuclear and vice president of Constellation Energy, told the New York Times in 2007. The nuclear industry has called for $100 billion in loan guarantees from the government. And while those are, in theory, “loans,” the Congressional Budget Office projects default rates of “well above 50 percent.” With the cost of reactors now estimated at over $10 billion, plans to build 100 new plants in the next two decades would require more than a trillion dollars in capital investment.

So what are the other big plans for nuclear from the Republicans? One is to “fast track” the regulatory process for new reactor applicants, in order to “cut the time needed to permit new plants by roughly 50 percent.” As I noted last week, there’s a huge problem here: the idea that the government has been bogging down the permitting process is misleading at best. The two leading reactor design proposals have been cited for significant safety flaws. Which makes their statement that the bill “clarifies that nothing would decrease the [Nuclear Regulatory Commission’s] ability to maintain the highest public health and safety standards” also questionable.

The GOP also wants to revive the plan to dump nuclear waste in Yucca Mountain, a proposal has been dead politically for some time now, and propose raising the limit on the amount of waste that could be stored there. The GOP bill would also use government funds for nuclear waste recycling to “enter into long-term contracts with private sector entities for the recycling of spent fuel” and prohibit “future Administrations from blocking or hindering recycling spent nuclear fuel.” Now, this is another misleading argument. First, the Obama administration just formed a new commission to examine options for the disposal of nuclear waste – including recycling. But as Chu told a Senate panel last week, while reprocessing is “a possibility,” currently it is not “financially viable,” and there are significant concerns about the nuclear proliferation.

Enacting the GOP’s plan would require ignoring financial viability altogether, allowing the federal government to run roughshod over state and local concerns about storage of waste, and streamlining review processes at the cost of human health and well-being. Sounds like an energy plan that will really go somewhere!