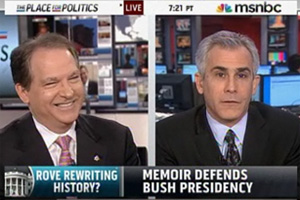 Spinners gotta spin. And Brad Blakeman, a Republican strategist and commentator, is an expert at keeping his own gyrations turning.

On Tuesday, he and I appeared on MSNBC to discuss Karl Rove’s new book. The main issue at hand was Rove’s assertion that George W. Bush did not “lie us” into the Iraq war. I went first and explained how the Bush administration had overstated iffy intelligence regarding Iraq’s WMD capabilities to grease the way to the invasion. Defending Bush’s war, Blakeman, who had worked in the Bush White House’s scheduling office, noted that Saddam Hussein had used WMDs against the Kurds—without mentioning that this had happened 15 years before the Iraq war and that UN inspectors had subsequently reported destroying Iraq’s WMD facilities. He then asserted that another reason for the war was that Saddam “was preventing inspectors from coming in and inspecting the [suspected WMD] sites that the UN demanded be inspected.”

I interrupted, “Brad, that’s not true,” noting that UN inspectors had been inside Iraq for months prior to the war and had uncovered no evidence of existing WMD stockpiles. “They were denied access,” Blakeman insisted.” And after I referred to two instances when Bush had made utterly false statements about Saddam’s relationship to al Qaeda and his nuclear weapons capabilities—statements not supported by the intelligence of the time—Blakeman argued that Bush had not lied. He repeated his claim that the reason for the war had been Saddam’s opposition to weapons inspections:

President Bush did not bring us into this war because of WMD. He brought us into the war because Saddam Hussein failed to allow inspections of the sites the UN demanded be inspected.

I told Blakeman that he was “absolutely wrong” and offered to bet him $1,000 that “the inspectors…were there.” Blakeman continued to say that the UN monitors had been kept from inspecting the sites. After host David Shuster said that he thought Blakeman owed me a thousand bucks, Blakeman said, “I never took that bet.”

No, he didn’t, unfortunately, for he had indeed peddled a false account. And afterward, he spun this whole exchange, brazenly misrepresenting what had transpired.

First, the facts. The inspectors were in Iraq for months before the war, scrutinizing key sites. Anyone who read a newspaper back then (or watched cable news) would know that—and know that the inspectors pulled out only when it became clear that Bush was about to attack. (They were not booted by Saddam.) But for sticklers who demand back-up, here are some excerpts from a 2003 Congressional Research Service report on the inspection process:

* On the eve of war, inspectors withdrew from Iraq.

* For the approximately three months of inspections, inspectors reported that the Iraq was cooperating on access, with a few minor delays. Dr. [Hans] Blix [the head of UNMOVIC] noted in his March 7 [2003] report that cooperation on process was better this time for UNMOVIC than it had been for UNSCOM [in the 1990s].

Inspectors in Iraq, inspections conducted. Case closed. Had Blakeman had the guts to accept the wager, he’d be a thousand dollars lighter.

Moreover, Blakeman’s claim that Bush went to war due to Saddam’s nonexistent opposition to inspections (as opposed to the nonexistent WMDs) is contradicted by Bush’s own words. In his speech kicking off the war, Bush proclaimed that the United States “will not live at the mercy of an outlaw regime that threatens the peace with weapons of mass murder.” He said not one word about inspections. And Rove himself writes in his new book that the war was based on WMDs: “Would the Iraq War have occurred without W.M.D.? I doubt it. Congress was very unlikely to have supported the use-of-force resolution without the W.M.D. threat.” (By the way, after the war began the UN’s top weapons inspectors—Hans Blix and Mohamed ElBaredei—said there had not been sufficient evidence of WMD activity to justify the invasion.)

Moments after this MSNBC spot concluded, the show’s producers invited Blakeman and me for a rematch to sort out who was correct regarding the inspectors. I accepted. Blakeman, according to an MSNBC source, did not. Instead, he took refuge in safer territory: Fox News.

On Thursday, he posted a column on that cable network’s website, with the headline, “I was Am-Bushed on MSNBC Over Iraq.” Blakeman claimed that Shuster and I had sandbagged him with “the worn allegation” that Bush “lied his way into war with Iraq.” Given that the initial media reports about Rove’s book had zeroed in on the WMD question, discussing this matter was hardly equivalent to a sneak attack. And Blakeman tossed out a real whopper:

In a desperate attempt to “prove” he was right, Corn offered to bet me $1,000.00 that he could “prove” Bush lied. And, who was going to be the judge? Yep, you guessed it, David Shuster. Does that not sound like an impartial and “fair and balanced” wager? I think not.

Blakeman got this wrong, too. The proposed bet was not whether Bush had lied. It was whether Blakeman had falsely declared that there had been no WMD inspections before the war because Saddam had blocked the inspectors.

In this article, Blakeman—who usually comes across as a fine fellow—went on to argue that Bush did not mislead the public about Iraq’s WMDs. But he’s a lousy advocate for that discredited argument. After all, he cannot accurately report on what he himself said during a television segment that was subsequently posted on the Internet. (The video is still available; see below.)

To recap: Blakeman initially makes a claim that was wrong. He refuses to return to discuss it. Rather, he writes an article misrepresenting what happened. And that column ends with a declaration: “I will continue to fight for the truth even if it means being ‘am-BUSHED’ on MSNBC.” Such are the toils of a talking head who no doubt learned various tricks of the trade within the Bush White House.

Cable news viewers might wonder if being caught disseminating false information will hurt Blakeman’s career as a pundit. I wouldn’t bet on that; there’s often no price to pay for spewing propaganda or pushing untrue talking points. These days, Blakeman also teaches politics and public policy at Georgetown University. His students ought to be grateful. With this episode, he has exposed them to a first-rate field experiment in spin.