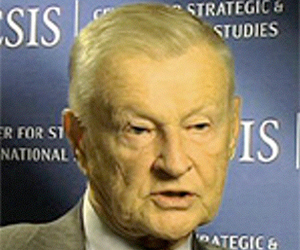 Iran’s stubbornness on its nuclear program has dominated a meeting this week of the G-8 nations’ foreign ministers—and even convinced Canada, the US’s “peaceful neighbor to the north,” to press for sanctions against the Middle Eastern state. But as the ministers focus on taking steps against Mahmoud Ahmadinejad’s regime, a trusted ally of the Obama administration and former national security adviser is telling the Arab media that America can “live with” a nuclear armed Iran, if necessary.

Zbigniew Brzezinski—who served as President Jimmy Carter’s national security adviser, and is a mentor to numerous current and former US diplomats—made the comments in an extended interview that’s set to air Wednesday on an Al Jazeera English TV show titled Empire. When asked if the US could tolerate a nuclear Iran, Brzezinski replied thus:

We managed to live with a nuclear Soviet Union in the days of Stalinism; we managed to live in a stable relationship with China, even though the leader of China, when China obtained the nuclear capability, publicly said, “Well, what’s nuclear war–300 million dead? is that a big deal?” The point is, we know historically that deterrence works and we know that we have the capability to deter Iran if it threatens not only us, but our neighbors. And I think we have enough reasonable calculus to conclude that the war, an additional war in the region, particularly that sensitive center of that region, will be very very risky for global stability.

Brzezinski added, however, that he endorsed the G-8’s push for greater pressure on Iran. But he expressed unease with some of the media’s and Beltway’s more hawkish rhetoricians:

Brzezinski’s geopolitical advocacy has always stressed alternatives to open conflict. An ardent critic of the Bush administration’s Iraq war policies, he once told Mother Jones readers that he feared George W. Bush might cause “a situation whereby before he leaves office he plunges us into some sort of semi-accidental and semi-deliberate conflict with Iran.” In that interview, he similarly argued that “deterrence has worked in the past, and there’s no reason to assume it wouldn’t work with Iran.”

But his recent intimation that a nuclear Iran is deterrable is an unusually bold recognition by a Washington insider that Iran could get its hands on atomic weaponry. While Brzezinski doesn’t hold an official position in the Obama foreign policy team, he and his son Mark were staunch campaign supporters of the president and advised him informally on foreign affairs. Brzezinski “has proven to be an outstanding friend and someone who I’ve learned an immense amount from,” Obama said on the campaign trail in 2007. That raises questions about whether the Obama administration is prepared like Brzezinski to accept the eventual existence of a nuclear Iran, and of how that might sit with American allies in the region, notably Israel.

Brzezinski’s commentary also contrasted strongly with the atmosphere in Gatineau, Quebec, where the G-8 foreign ministers met and issued a press release calling for “strong steps to demonstrate international resolve…and persuade Iran to build greater international confidence in the peaceful nature of its nuclear program.” That agreement followed a CIA report that expressed concerns about Iran’s nuclear capabilities in stronger language than recent National Intelligence Estimates had done. The language coming from some ministers gathered in Quebec was even stronger, with even Canadian Foreign Minister Lawrence Cannon expressing exasperation with the Iranian regime. ”Unfortunately I believe we are left with little choice but to pursue additional sanctions against Iran ideally through the United Nations Security Council,” he told the New York Times.