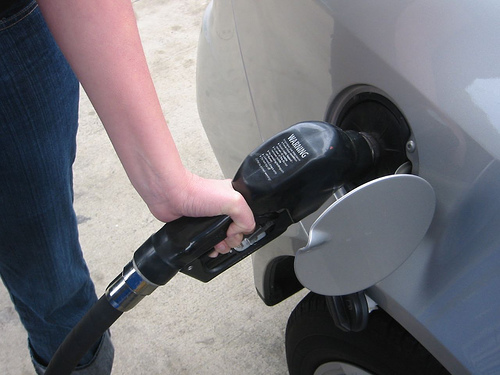 Part of the compromise being worked out on climate and energy in the pending Senate bill is expected to be a fee on transportation fuels, rather than including oil refiners under a cap and trade program. The idea has been given a thumbs-up by oil companies, and environmental groups are also fans of the idea — a rare coincidence these days. But will the policy work?

If done properly, it could be. Most environmental groups are supportive of the idea of a fee on fuels, or a “gas tax,” if you prefer, but only if the fee goes to other programs that would help reduce oil use. The transportation sector accounts for 28 percent of US emissions, so it’s not a small issue when we’re talking about a climate bill.

The linked fee would be an additional price added to fuels to pay for the carbon cost. It could be 25 cents, or it could be $4, if we wanted to be more like, say, Europe. The fee would be tied to the price of pollution permits in the greater carbon market. Oil companies like BP and ConocoPhillips favor the approach (which they suggested last year) because it frees them from the complex cap and trade program and instead puts the burden of reducing oil use on consumers. Oil-friendly senators like it too. And a lot of environmental groups say they’re open to it as well.

“We generally like the idea of having a gas tax,” said Kate McMahon, an energy policy campaigner at Friends of the Earth. “But it has to be really big … I don’t see Congress putting 50 percent tax on gasoline. That’s what we would need in terms of a price signal.”

To be effective, a fuel fee has to cause people to use less oil — by driving less, buying a more fuel-efficient vehicle, or switching to public transportation. Studies have found that a gas fee has to get into the dollar figures to actually change people’s habits. A report released this month by researchers at Harvard’s Kennedy School of Government found that “gas prices greater than $7/gallon” may be needed in order to meet the environmental goal of reducing emissions from automobiles 14 percent by 2020. Even the price spike to over $4 a gallon two summers ago didn’t curb American driving all that much; we’re a society constructed to encourage use of the personal automobile, and a culture that really, really likes it.

“A price signal, unless it’s a big price signal, is unlikely to have a big effect,” said Deron Lovaas, federal transportation policy director at the Natural Resources Defense Council. Thus, he says, “What matters just as much as the price is where the investment goes.” If that money is going to be used to build new roads, it’s probably not going to help the climate very much. But it might if the money goes to programs to ease congestion on existing roads or, better still, create public transportation systems that get people out of cars.

Will that happen? Unclear. The bill’s Republican co-conspirator, Sen. Lindsey Graham of South Carolina, last week indicated that the price would probably be fairly low, and he told reporters that the majority of the money will come back to consumers via a rebate. “Any money not going back to the consumer from this linked fee has to go to something that the country needs, like retiring the debt, or I won’t support it,” said Graham.

If the fuel fee is low, and consumers are just going to pocket it again, that probably won’t do much to change their habits. Neither will using the revenues to pay down the debt. And if we’re also larding the bill up with increased domestic drilling, we’re certainly not sending the right signals about oil use in general.

There are also political challenges to setting a fee on gasoline. After the House bill was maligned as an “energy tax,” there are plenty of worries among Senate Democrats about putting an actual tax on gasoline. Several Democratic staffers have expressed concern that the policy won’t make be easy to sell back home. And they’ve also expressed concerns that the oil companies just like this approach because it’s easier to demonize.

What the fuel policy looks like and how it plays out politically will be among the more interesting debates to watch when Sens. Kerry, Graham, and Lieberman roll out their bill following the Easter recess. There’s been a lot of hand-wringing about whether their effort can actually be considered a climate bill after all the special interests have been appeased. But considering the campaign that the American Petroleum Institute waged against the House bill last summer, it’s no surprise that the trio has made keeping them happy a top priority.