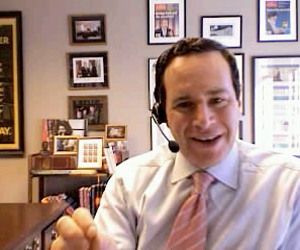 [UPDATE: We’ve added in a reference to DC bureau chief David Corn’s Sunday night dispatch, which highlights the incendiary remarks David Frum made about health care politics as Republicans’ “Waterloo”—possibly the remarks that led to his ouster from the conservative fold.]

David Frum, the enigmatic young mandarin of the GOP who speechified many of George W. Bush’s most manichaean lines, just dropped a bomb over on his blog: He’s been dumped by his significant other of seven years, the right-wing American Enterprise Institute. And it doesn’t sound like it was a pleasant breakup. Said Frum:

“I have been a resident fellow at the American Enterprise Institute since 2003. At lunch today, AEI President Arthur Brooks and I came to a termination of that relationship. Below is the text of my letter of resignation.”

This will memorialize our conversation at lunch today. Effective immediately, my position as a resident fellow at the American Enterprise Institute is terminated. I appreciate the consideration that delays my emptying of my office until after my return from travel next week. Premises will be vacated no later than April 9.

I have had many fruitful years at the American Enterprise Institute, and I do regret this abrupt and unexpected conclusion of our relationship.

So what gives? How could one of the best-known fellows at one of the best-known Beltway opinionators end up on the outs? Well, back in December, our own Kevin Drum said that Frum “has been estranged from the hard-right wing of the Republican Party for a while.” And on Monday, the MoJo blog reported that Frum’s recent activities had included a poll that exposed the general ignorance of Tea Partiers about US politics and taxes, which couldn’t have sat well with his overseers at AEI. They do loathe them some health care reform and love them some irate patriots. But perhaps most damningly, as MoJo’s DC bureau chief David Corn reported Sunday, was an incendiary Frum blog post describing health care as the GOP’s Waterloo. Corn writes:

He noted that “it’s a good bet that conservatives are over-optimistic about November” because “by then the economy will have improved and the immediate goodies in the healthcare bill will be reaching key voting blocs.” Frum’s j’accuse! blamed “conservatives and Republicans ourselves” for making a poor strategic decision: “We would make no deal with the administration. No negotiations, no compromise, nothing…We followed the most radical voices in the party and the movement, and they led us to abject and irreversible defeat.” Republican legislators who wanted to cut a deal, he notes, were trapped and pinned down by “conservative talkers on Fox and talk radio.”

Strong stuff—and Frum didn’t back away from it the next day in his commentary to the New York Times on GOP political nihilism:

David Frum, a fellow at the American Enterprise Institute, the conservative research organization, said Republicans had tried to defeat the bill to undermine Mr. Obama politically, but in the process had given up a chance of influencing a huge bill. Mr. Frum said his party’s stance sowed doubts with the public about its ideas and leadership credentials, and ultimately failed in a way that expanded Mr. Obama’s power.

“The political imperative crowded out the policy imperative,” Mr. Frum said. “And the Republicans have now lost both.”

“Politically, I get the ‘let’s trip up the other side, make them fail’ strategy,” he said. “But what’s more important, to win extra seats or to shape the most important piece of social legislation since the 1960s? It was a go-for-all-the-marbles approach. Unless they produced an absolute failure for Mr. Obama, there wasn’t going to be any political benefit.”

Indeed, most Americans with insurance are unlikely to see any immediate change in their coverage, and several Republicans warned that the party could pay a price for that.

“When our core group discover that this thing is not as catastrophic as advertised, they are going to be less energized than they are right now,” Mr. Frum said.

He warned that the energy Republicans were finding now among base voters would fade.

This may be hard for some on the left to take, given how they’ve vilified Frum for his neoconservatism and war-hawking in the past. But it surely looks like he was thrown overboard by fellow conservatives for calling it like he saw it. Is this further evidence the GOP and its ilk plan to go more paleo with their paleoconservatism? That remains to be seen. But one thing’s certain: Whatever the prevailing conservative narrative becomes—and however much it seems to contradict reality—nobody in the flock had better question that dogma.