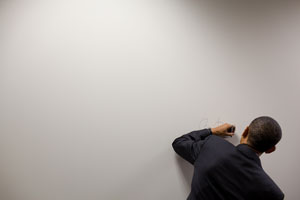 President Barack Obama is considering issuing an executive order on abortion as part of a last-ditch bid to convince members of Rep. Bart Stupak’s anti-abortion bloc to vote for the Democrats’ health care reform package. Rep. James Clyburn (D-S.C.), the Democrat in charge of “whipping” members to vote for the bill, told reporters on Saturday that while he hadn’t yet read the proposed order, he was hopeful it might change some minds. “I understand the language is being read by various people,” Clyburn said.

The wording of the order is, of course, crucial. And it may not be enough to flip Stupak.

The first reason to doubt the order will satisfy Stupak (D-Mich.) is that Rep. Diana Degette (D-Colo.), a leader of the congressional pro-choice caucus, has expressed support for it. “If there was an executive order saying that they weren’t going to use federal funds in the bill to pay for abortions that would be fine with me because we’ve stipulated to that even though we don’t like it,” Degette told the Huffington Post on Saturday. That statement suggests Degette has received assurances—either from the White House or House Speaker Nancy Pelosi—that the order wouldn’t be the equivalent of Stupak’s anti-abortion amendment, which she opposes.

Rep. Lynn Woolsey (D-Calif.), the co-chair of the progressive caucus, has a similar position. Woolsey told Mother Jones that she would be “fine” with an executive order clarifying the health care reform bill’s abortion language. “I have not seen the words,” of the order, Woolsey said to reporters on Saturday. She suggested that even though she hasn’t seen the order, she already knows what it might say. “The executive order will describe what the health bill contains regarding abortion and federal funding,” she noted. “It will be very clear, there is no federal funding that will be spent on abortions in the health care bill.”

There are two reasons the White House might be considering an executive order. One reason would be to make actual, substantive changes that would win over some of Stupak’s bloc. And that might work: as Clyburn said, “If an executive order is sufficient to restart stem cell research, it ought to be sufficient here.”

More likely, however, Obama simply wants to give political cover to Stupak bloc members who want to vote for health care reform but who need a good excuse to change their minds. Degette and Woolsey’s support for the executive order indicates that it will not amount to the same thing as the Stupak amendment, which they oppose. (Jane Hamsher has another theory—that Degette is simply selling out her pro-choice supporters. But that doesn’t jive with Degette’s recent threat to bolt if Stupak got a new vote on adding his anti-abortion provisions to the Senate health care bill at the last minute.)

If the executive order turns out to be simply a restatement of existing law, Stupak might remain unsatisfied. He’s been arguing for months that his provision is the only way to prevent health care reform from funding abortions. It would be suprising if he settled for anything less now. But if this move is enough to peel away members of Stupak’s bloc, why the Democrats didn’t try this sooner. “Oh well, whatever,” Woolsey said when asked this. “Everything’s timing. Timing is everything. It’s a good thing that it’s done now.”

This post was reported by Suzy Khimm and Nick Baumann and written by Baumann.