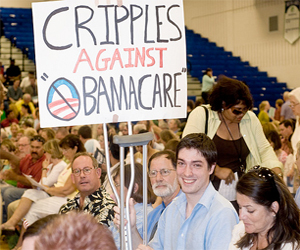 Unsatisfied with simply denying 30 million Americans health care coverage, crying crocodile tears for the Constitution, and labeling skeptics of their point of view “socialist,” right-wing retrogressives have decided they need to up the ante to halt Democratic reforms. They need to bash a kid.

The kid in question is 11-year-old Marcelas Owens, who has become a young public crusader for health insurance reform since his mother, 27-year-old fast-food worker Tifanny Owens, contracted pulmonary hypertension, lost her job due to her poor health, lost her insurance due to her unemployment, and finally died, leaving Marcelas in the care of his grandmother.

In most people’s books, that would make Marcelas a sympathetic soul, deserving of compassion and maybe a little assistance. If that’s how you feel about it, don’t tell Rush Limbaugh, Glenn Beck, Michelle Malkin, or the semiliterates who run this “news” site. McClatchy’s Les Blumenthal collected the right-wingers’ anti-Marcelas vitriol in a rusty bucket and splashed it out all over the Internet, recording for posterity their emphatic “Yes!” in reply to the question: Are you douchier than a fifth-grader?

As the late sportscaster George Michael used to say, let’s go to the tape:

“Now this is unseemly, exploitative, an 11-year-old boy being forced to tell his story all over just to benefit the Democrat Party and Barack Obama,” Limbaugh said on March 12, according to a transcript his show. “And, I would say this to Marcelas Owens: ‘Well, your mom would still have died, because Obamacare doesn’t kick in until 2014.'”…

Beck, according to a transcript of his March 15 show, pointed out that Owens’ recent trip to Washington was paid for by Healthcare of America, a group that has been lobbying for a health care overhaul.

Malkin dismissed Marcelas Owens as “one of Obama’s youngest lobbyists” who has been “goaded by a left-wing activist grandmother,” promoted by [Washington Sen. Patty] Murray and has become a regular on the “pro-Obamacare circuit.”…

Also, there’s these guys, who like to think they’re watchdogging the “liberal” media. They dismissed Marcelas as a “child protester” (ageism, anyone?) and derided a CNN anchor for calling him a “brave young man.” Also, Gandhi was a “bony” protester and Gloria Steinem was a “chick” protester. I suppose that would make Rush Limbaugh a “porcine” protester. Or, if you prefer, just a “wealthy” protester.

Look, if you disagree with health care reform, that’s one thing. If you disagree with even bringing it up because you think doing so exposes the bringer-upper as anti-American or anti-capitalist, well, that’s another thing. And if you make millions of dollars pandering to the latter group with tactics that include crapping on a FRICKIN’ MOTHERLESS PRETEEN, that ain’t even in the same ballpark. That’s psychopathic by any standards, except maybe those of a few degenerate Roman emperors and deep-sea invertebrates who subsist on krill.

Tifanny Owens’ fatal condition, by the way, is apparently manageable, as long as you can afford a hundred grand a year for “consistent and constant” treatment, Katie Kroner of the Pulmonary Hypertension Association told McClatchy. Which means Limbaugh probably could have kept Tifanny alive indefinitely, just by cutting out Oxycodone, Viagra, and ham sandwiches.