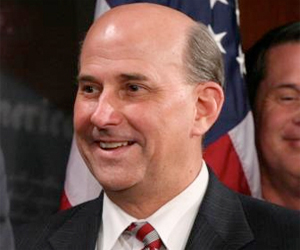 Though they still intend to make health care reform the focus of their midterm election campaigning, many Republicans have rolled back their doom-and-gloom rhetoric on the legislation passed Sunday. Many, but not all. Almost alone in the vanguard of mad-as-hell conservatives stands Rep. Louie Gohmert (R-Texas), who thinks the health care debate has exposed democracy’s biggest enemy: Democracy itself. And Gohmert is demanding that swift action be taken against this internal threat.

Gohmert argued Monday that the direct election of US senators by the American public has led to “the usurpation of the rights of the states and of the people,” which culminated in Sunday’s health care vote. You see, 39 states don’t like the health care bill law by Gohmert’s count (apparently because at least one disgruntled legislator in each of those states has suggested a bill barring local enforcement of the new federal law). And if those state legislatures could simply anoint their US senators, rather than leaving the choice to voters, then the voters’ will could win the day. If only it weren’t for that doggoned Constitution!

“Ever since the safeguard of state legislatures electing US senators was removed by the 17th Amendment in 1913, there has been no check or balance on the federal power grab for the last 97 years,” Gohmert said in a press release. Later, in House floor remarks, he added that the Amendment enabled the “usurpation of states’ rights…Let’s get an amendment that gets the balance back into the country and the Constitution, before this Congress destroys what’s left.”

The merits, as they were, of Gohmert’s argument have been well analyzed elsewhere: The irony of taking away the franchise in order to enfranchise America; the fact that, since 27 state legislatures are currently Democratic-run, it’s unlikely Gohmert will actually be able to muster the 39 states needed to edit our nation’s founding document; and the fact that this kinda sorta undercuts the GOP’s contention of recent weeks that Sen. Scott Brown’s election in Massachusetts—you know, by, like, voters—represented the Highest Will of the People.

Amazingly, Louie Gohmert was a judge before he was a congressman. In Texas. Also amazingly, he’s not the first Republican in this Congress to want state legislatures to get veto power over Senate candidates.

Even as colorful ideologues go, Gohmert is a fascinating study. Lest you suspect he doesn’t reflect deeply on his convictions, Mother Jones has compiled the recent highlights of his House tenure:

Previously, Mother Jones has collected a wealth of Gohmertisms in its “Unhinged Republicans in Their Own Words” feature, including these (emphasis added):

“We’ve been battling this socialist health care, the nationalization of health care, that is going to absolutely kill senior citizens. They’ll put them on lists and force them to die early because they won’t get the treatment as early as they need.”

“I would rather stop this socialization of health care because once the government pays for your health care, they have every right to tell you what you eat, what you drink, how you exercise, where you live.“

“It is killing this country to move so quickly towards socialism…. I learned a great lesson on exactly why socialism never works. Not only did it not work for the New Testament church, and eventually Apostle Paul had to issue an order that if you don’t work, you don’t eat, it didn’t work for the Pilgrims. They had too many people starve to death the first year; so they went to private property and it flourished.“

(Comparing health care reform to the policies of Adolf Hitler) “Absolutely. Boy that’s the best example, maybe the best example…You just referred to that point in history where this stuff has been done before. It was done in the 1930s and it’s not the only place its been done. It has been done throughout history.”

“We have been hearing that by 20 years ago we were up to under 12,000 polar bears in the whole world, and now we know there are over 25,000 polar bears in the world. They’re doing pretty well. I’m pleased the polar bears are doing well…Hopefully, we won’t have to open up additional [hunting] seasons, that they will moderate their behavior. But we also saw with the caribou and people talking about how terrible it is to produce oil in Alaska. And we heard that if they ever put that pipeline up to Prudhoe Bay, it would kill off the last 2,900 caribou that were in the area, that we just couldn’t do that. It would destroy their mating habits. Turns out, caribou now, when they want to go on dates, invite each other to go to the pipeline on cold winter nights because that oil is warm going through the pipeline and it makes them amorous. And now we’re up to 30,000 caribou in that herd. So it turns out man and caribou and polar bears can do just fine.”

The tragic irony: Should Gohmert succeed in his repeal of the 17th Amendment and later develop his own senatorial aspirations, he’d deny American voters the satisfaction of electing him—truly, a man like no other.